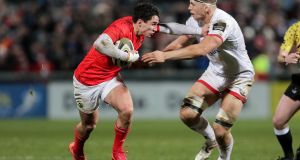 Joey Carbery in action for Munster against Ulster at the Kingspan stadium in Belfast. Photograph: Laszlo Geczo/Inpho

Munster outhalf Joey Carbery has suffered a wrist ligament injury which is likely to rule him out of the Six Nations entirely. The injury-cursed outhalf apparently suffered his latest mishap during Munster’s 38-17 defeat to Ulster last Friday in what was his first start for the province this season.

If it wasn’t for Carbery’s bad luck for much of this past year, he wouldn’t have any luck at all, and the way events have conspired against their outhalf of late, Johann van Graan and Munster may be feeling the same way.

Carbery will require an operation and has been “ruled out for the immediate future” according to the Munster website, with estimates suggesting the injury could sideline him for up to three months.

Aside from scuppering Carbery’s Six Nations ambitions and leaving Andy Farrell even more concerned about Johnny Sexton remaining on course to recover from the knee injury which has sidelined him for the last four weeks.

Carbery has only started four games of rugby since January last year and, similarly, in only his second start for Ireland he sustained a fractured left forearm after being tackled by Fijian prop Peni Ravai on the hour mark of a game Ireland won 23-20. He didn’t play again for three months.

Carbery’s latest misfortune has left Munster with an outhalf crisis going into their make-or-break Heineken Champions Cup meeting with Racing 92 in Paris next Sunday.

JJ Hanrahan, who had enjoyed his most sustained and overdue spell at outhalf for the province while Carbery was recovering from the ankle injury which restricted his involvement in the World Cup, has been sidelined for the last two weeks with hamstring issues.

Furthermore, Tyler Bleyendaal hasn’t played since mid-November, so conceivably Munster could go into their biggest game of the season without any of their three specialist outhalves.

Munster have said that Hanrahan, along with Tommy O’Donnell, “are both rehabbing well from hamstring injuries sustained against Leinster”. If not fit, Munster’s only other option would be to start inside centre Rory Scannell at 10.

Furthermore, Munster have confirmed that Andrew Conway’s neck injury “will be reviewed as the week continues” while Fineen Wycherley failed a HIA last Friday and will follow return to play protocols.

Meanwhile, Sexton is unlikely to play again before the Six Nations as he continues his rehabilitation from the knee injury he sustained in Leinster’s win away to Northampton, although he and his medical advisors remain optimistic he will be fit for Ireland’s opening game at home to Scotland on February 1st.