Champions Cup permutations: what do the provinces need to progress?

Leinster, Ulster, Munster and Connacht all in with a chance of reaching the quarter-finals 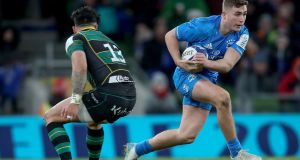 Jordan Larmour has played a key role in Leinster’s unbeaten start to the season, including their 19-point haul in four Champions Cup games. Photograph: Bryan Keane/Inpho

The lights are coming down, the skies are grey and dreary and the Christmas holidays are fading quickly out of view.

But fear not - the Champions Cup returns this weekend to ease the January blues, and all four provinces remain in the hunt ahead of the penultimate round of fixtures.

Here is a look at what they all require in order to reach the knockout stages, before the final two rounds of the pool stages get underway.

Who qualifies for the quarter-finals?

In order to separate teams from separate pools, match points are followed by points difference and then tries scored.

Are the quarter-finals seeded?

Yes. The top four placed sides from the eight-quarter-finalists will receive home advantage in the last eight. The top two placed sides will also be guaranteed a home semi-final, providing they progress to the last four.

Who are the current top eight seeds?

Where do the provinces stand?

Pool One - Leinster
Leinster have been supreme in Europe so far this season, and are favourites to reclaim the crown they lost to Saracens in last year’s final, after reaching the quarter-finals with two games to spare. Leo Cullen’s side have won four from four and picked up three bonus points, leaving them on 19 points - a tally only matched by English Premiership side Exeter. Leinster’s points difference is superior to the Chiefs (+77 plays +62), meaning they are currently the tournament’s top seeds.

Leinster welcome Lyon to the RDS on Sunday afternoon before a final round clash away to Benetton. If they win both with a bonus point they will finish the pool stages on 29 points and therefore would be guaranteed both home quarter and semi-finals as one of the top two seeds, with only Exeter able to match their overall points tally.

Like Leinster, Exeter have been in devastating form in Europe this year and have won four fixtures from four, picking up 19 points in the process. Unlike Leinster, their progression is yet to be confirmed, as they can still be caught in their pool by second place Glasgow - who have nine points. The two sides meet at Scotstoun this weekend, after the Chiefs thrashed Glasgow 34-18 in round two. If Glasgow fail to beat Exeter on Saturday, while overturning the negative head-to-head record in the process, then the Premiership side are through to the quarter-finals.

A defeat on Saturday would prove terminal to Glasgow’s hopes of reaching the knockout rounds, while Sale Sharks (six points) and La Rochelle (five points) are playing for pride in the final two rounds.

Pool Three - Ulster
Ulster have arguably been the Champions Cup’s surprise package so far this term, with Dan McFarland’s side picking up four wins from four Pool Three matches - including a rousing 18-13 success at home to Clermont. They currently lie in top spot on 17 points but have the French giants breathing down their necks on 16. The Top 14 outfit can leapfrog Ulster when the two meet at Stade Marcel-Michelin on Saturday, with the province then welcoming Bath, who have nothing to play for, to Ravenhill in the final round of pool fixtures.

Ulster are guaranteed at least second place in Pool Three but two defeats could see their hard work undone and mean they miss out on a place in the quarter-finals. One victory would be enough to see them through, and they remain in control of their own destiny - however, as current fifth seeds, two wins might still not be enough to secure a quarter-final in Belfast.

Pool Four - Munster
Munster have won two, drawn one and lost one of their opening four Champions Cup fixtures, leaving them with plenty of work to do in order to reach the quarter-finals. Johann van Graan’s side beat a depleted Saracens at home before losing at Allianz Park, however it is the 21-21 draw with Racing 92 in round two they might rue the most. Racing currently lead the pool on 17 points, with Munster second on 11 and Saracens third on 10. Munster travel to Paris this weekend, with the hosts knowing a win will see them into the last eight.

If Munster fail to pick up any points in Paris, they will only be able to finish on a maximum of 16 for the pool - providing they beat the Ospreys with a bonus point in round six. Not only would this potentially leave them short of a top-eight seeding, but it would also clear the way for defending champions Saracens to leapfrog them into second place. Victory against Racing would leave Van Graan’s side confident of beating the Ospreys and reaching the knockout stages - although a Thomond Park quarter-final might be beyond their grasp.

Pool Five - Connacht
Of all the Irish provinces Connacht are the least likely to make it into the quarter-finals, despite landing two of the best results in their history during the pool stages. Andy Friend’s side stunned Montpellier in round one, winning 23-20 at the Sportsground, before staging a huge comeback against Gloucester in Galway last time out - edging the Premiership side 27-24 with a last-minute try. However, defeats away to Toulouse and Gloucester mean they lie in third place on eight points, with qualification looking unlikely.

Connacht meet European aristocrats Toulouse - current pool leaders and third seeds on 18 points - this weekend, before a final round trip to Montpellier. Two bonus-point wins, improbable as that would be, could see the province through to the quarter-finals while even two wins without a bonus point probably wouldn’t be enough. Add in Connacht’s huge injury list - which has now passed the 20-man mark - and it would be a miracle of the men from the west progress to the last-eight.

Final two rounds of fixtures by pool (all times Irish; all live on BT Sport, other channels listed after games)