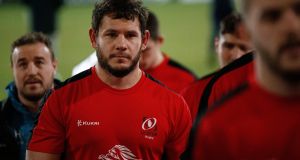 Pool Three leaders Ulster look to be at full strength for their group-defining Champions Cup visit to Clermont Auvergne as Marcell Coetzee, Jordi Murphy and John Cooney have all been passed fit to play.

In-form Ulster’s chances of going five wins from five in Europe at the hostile Stade Marcel-Michelin, and potentially sealing qualification for the second season in a row, have been boosted by having all three key players good to go.

Coetzee missed out on last weekend’s 38-17 hammering of Munster, at the Kingspan, after shipping a concussion the week before in the similar hefty result at home to Connacht after a heavy collision with former Ulster prop Paddy McAllister.

The South African’s aggressive ball-carrying presence will be critical for the province’s chances in the penultimate group game at Clermont, who are just one point behind Ulster and whose only loss in the pool was last November’s narrow defeat in Belfast.

Cooney, whose superb form continued last Friday when he scored 18 points against Munster, and eclipsed Ireland scrumhalf Conor Murray, was taken off late in the game for a head injury assessment.

There were no issues from the scrumhalf’s HIA and he has been able to fully train and presumably hook-up again with Billy Burns in what has been a profitable half-back partnership for head coach Dan McFarland.

Murphy has not featured for Ulster since last month’s 34-10 win over Harlequins at the Stoop and was unavailable for selection against Munster due to illness.

Though Ulster’s previous trip to France ended badly at Racing 92 in October 2018, there is a quiet confidence this term things are different as the northern province come into this clash off the back of seven wins from their last eight games and with only three defeats from their total of 14 matches played.

A victory at Clermont, Ulster have played there once before and were heavily beaten, would open up the possibility of sealing an all-important home quarter-final from the province’s final pool game at home to Bath.

The French club’s home European form has been fairly attention-grabbing as they have run-up a total of over 100 points from the meetings with Harlequins and Bath and have scored 20 tries from four cup games, a feat only equalled by already qualified Leinster.

“Looking at the performances, we have probably had a steady upward incline in terms of the quality of performance,” said Ulster skills coach Dan Soper.

“We have got an opportunity to get a home quarter-final in Europe which would be pretty great. We’ve got a lot experienced guys to lean on and it’s (playing Clermont) something we will relish. We’ll embrace it and look forward to it.

“They’re a hell of a team and if we’re not on the money, it’ll all go to the last game (against Bath). So to put ourselves in a great position, we’ll probably need to win them both,” he said.