Johnny Sexton unlikely to play before start of Six Nations 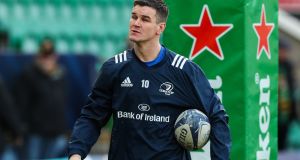 Johnny Sexton is a doubt for Leinster’s match against Benetton in less than two weeks. Photograph: Billy Stickland/Inpho

The Irish outhalf, who injured his knee in Leinster’s first European Champions Cup match against Northampton, will not play this week against Lyon and is also a doubt for Leinster’s final pool match against Benetton in less than two weeks.

Other than the South Africa teams, Cheetahs and Southern Kings, playing each other, there are no Pro 14 matches scheduled for the week before Ireland open their 2020 Six Nations Championship against Scotland on February 1st in Aviva stadium.

Leinster’s next Pro 14 match is at home to Cheetahs on February 15th in the RDS with the final European pool match in Italy against Benetton on January 18th.

“He’s making good progress, but that would be a tremendous turnaround from a MCL [medial collateral ligament] injury,” said Stuart Lancaster on Sexton making a return for the game against Benetton.

“It’s not an injury that you suddenly go from being not injured to fit again in two or three weeks. It takes time to strengthen the ligament, to start running again and everything that goes into being back fit again and playing a robust game like rugby. So it’s going to take some time but he has made some good progress and everyone’s optimistic about how he’s going to go over the next couple of weeks.”

Depending on his rehabilitation the opener against Scotland may also be in jeopardy and with Joey Carbery also injured that could open the door for Ross Byrne.

To add to Leinster’s frontline injuries James Ryan remains a doubt for Sunday’s game against Lyon. The Irish secondrow was withdrawn early in the first half of the match against Connacht with a calf injury and is currently being monitored.

“You know James brings so much to the games with his physicality and his work rate but, listen, they way we train, if someone gets injured, someone else can just slot in very easily,” said Leinster and Ireland fullback Jordan Larmour.

“You saw that on the weekend. We had 14 changes and we still put out a good performance so I suppose anytime you lose someone of that calibre is a bit of a loss but I suppose we have players there that can step up and do a good job.”

1 Andy Farrell ticking all the boxes in advance of England showdown
2 David Brady says he has witnessed the illegal payments of GAA managers
3 Players impressed with Bono’s Irish pride and desire
4 Owen Doyle: Day of the jackal may be coming to an end
5 Ireland wary of Peyper calling the tune as they head for Twickenham
Real news has value SUBSCRIBE