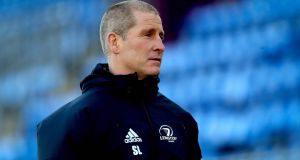 Don’t ask Stuart Lancaster. The Leinster coach doesn’t want to know, won’t hear of it, can’t even begin to discuss it. This winning streak Leinster have carved out for themselves just keeps going and going. Just don’t ask the coach about it.

With 10 wins in the Pro14 league and four in the European Champions Cup, Lancaster guffaws at the suggestion of the Leinster freight train running to the very end of the seasonal track without defeat.

It hasn’t been done in the northern hemisphere, a whole season without defeat. If Leinster are to do it they must beat Lyon and Benetton in their European pool then win the quarter, semi and final. With that there are the regular Pro 14 matches and the playoffs. There is a lot of track remaining.

“No, no. It’s not something that I think any team would ever go and be that arrogant that you say we are going to go through the season unbeaten, when you know the games that you have got to come around the corner,” says Lancaster.

“Two European games for a start, three Pro14 games, then we go into the quarter-finals, semi-finals and finals of Europe and the Pro14. There is no team that would ever sit there and go, ‘We want to go unbeaten,’” he adds.

Every training session is competitive and so ferociously competed, that’s what drives the standards

“What drives us, obviously, is to win every game, that’s for sure. I don’t think we should shy away from that, but we don’t talk about an unbeaten season.”

Lancaster says that the players have to discipline themselves not to listen to the chatter and that they can’t afford to distract themselves from Lyon, who in round two were a converted try short of Leinster, 6-13.

This week there is an outhalf position to fill with Johnny Sexton injured. James Ryan might join him in the sick bay, leaving Devin Toner and Scott Fardy, probably, to fill the starting secondrow positions – more pressing issues than a winning streak.

“No, honestly. It never even crosses our mind to mention it, really,” says Lancaster. “And I don’t think they [the players] are conscious of it.

“I think they are very conscious that if they get the opportunity, they need to play well because they might not get another opportunity, because someone will play well the next week. That’s what drives performance.

“Not only that, I think the quality and intensity with which we train – every training session is competitive and so ferociously competed, that’s what drives the standards.”

Getting the home quarter-final is critical for a variety of reasons. Coming first or second seed is equally important

In football, “the Invincibles” was a nickname used for the Preston North End team of the 1888–89 season, the Rangers team of the 1898-99 season and the Arsenal team of the 2003-04 season managed by Arsène Wenger.

Preston North End earned the nickname after completing an entire season undefeated in league and cup competition (27 games). Rangers were victorious in every league game (18 games), and Arsenal were undefeated in all league games (49 games).

In a boiling-over match, Manchester United finally finished Arsenal’s run, the Gunners’ premature “50 not out” Nike-branded shirts underneath their playing kits and a tunnel punch-up adding to the occasion.

But Leinster are having none of it. Now, earning a home quarter-final is all that interests Lancaster. The first match in Lyon was an arm-wrestle, with Leinster’s defence – especially with Jordan Larmour binned late in the first half – earning the win. It was dogged and ugly.

“Getting the home quarter-final is critical for a whole variety of reasons,” says the Leinster coach. “Coming first or second seed is equally important because then you get a home semi-final if you win your home quarter.

“We found to our cost a couple of years ago when we drew the final pool game against Castres. We end up in third place, had a home quarter-final and away semi-final against Clermont and lost that. That sticks with everyone.

“If we come unstuck this weekend then we’ll be very disappointed with ourselves because ultimately our goal is to keep driving and winning to get that top seed. Exeter on 19, Toulouse on 18, Ulster on 17 – lots can change very quickly in a weekend.”

For now at least, the streak is being downplayed, with Leinster looking more at how they can maintain cohesion in the team given the 50-plus squad players they will use. Ciaran Frawley at outhalf playing with Joe Tomane and Garry Ringrose probably hasn’t happened in a game before, says Lancaster.

The combination will be different this week and was different the week before. Still, Leinster keep winning.

“Maybe it’s bigger in your minds than it is in ours,” says a weary Lancaster. “The only thing I’m thinking of is, we are going to be playing against a team that’s second in the Top 14 at the moment.”