Evolution the key as fourth star shines brightest for Leinster 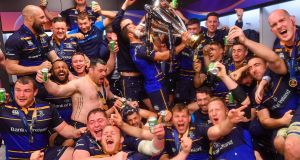 The Leinster squad celebrate in the dressingroom following their victory against Racing in the Champions Cup final at the San Mames Stadium in Bilbao, Spain. Photograph: Ramsey Cardy/Sportsfile

They’ll have that fourth star forever etched into their jerseys now, and how Leinster earned it. Having beaten the table-toppers of the Premiership, Top 14 and Pro14 home and away, Leinster then disposed of the back-to-back European champions and the Pro12 champions, before digging deepest of all to eventually subdue Racing’s wily and monstrous bunch in the Bilbao rain. Winning ugly after winning beautifully.

That leaves no room for argument. This may have been Leinster’s least memorable final, but it’s arguably been the pick of their four campaigns. They’re European aristocracy no less now. Yet when Toulouse won their fourth Cup in 2010, Leinster lagged three behind them. The French club seemed out of sight.

“It really did,” admitted Cullen. “It seemed like Toulouse were that club that were going to kick on. You have to keep chipping away, keep trying to get better. I suppose there’s a lesson in that too – don’t stop at four.”

Noting the emergence of new powerful rivals to Toulouse in French club rugby, Cullen said: “The landscape changes forever. You need to keep evolving all the time and keep getting better. Toulouse are a good lesson for us, because if you sit still for too long, people will pass you by. We’ve had to wait so long to get to this stage again; six years we had to wait. Hopefully it won’t be another six years.”

“I was overjoyed, really overjoyed. I was delighted for the players. It was a pretty incredible feeling. It might not seem that when you talk to me now,” said Cullen, smiling at his own typically deadpan delivery, “but at that moment, I have never experienced anything quite like it to be honest”.

“When you are a player it is very different because you are in the mix, you are doing things; it’s a very different feeling. From a coaching point of view it is a bit more mentally challenging. I’m just delighted for all the people who are involved. We see them every day, and we thanked a lot of people at the start of the week because I think they each played a part.

“But, ultimately, our fate is decided by the 15 guys on the pitch at any given time and those guys, credit to them, they found a way. It wasn’t necessarily the way we would have liked to have played. It was winning pretty ugly, but maybe that’s what made it a little more sweet in many ways, because it was as ugly as it was.”

As in 2011, when Munster denied Leinster a double in the Magners League final at Thomond Park a week after their famous comeback against Northampton, so their rivals are lurking in the long grass again for next week’s Guinness Pro14 semi-final in the RDS.

Johnny Sexton said he hurt his groin when slipping, so handing the kicking duties over to the squad’s other driving force, Isa Nacewa. Cullen reckoned Sexton was “fine” but admitted his outhalf and Robbie Henshaw both took bangs, and they looked to be limping heavily enough an hour or so after the full-time whistle.

“Munster, with the prep they’ll have had, they’ll have got the edge. They’re up and running this week, thinking about Leinster and watching the game today; probably having a plan in place. It gives them a huge advantage from the off.

“But it’s important our guys celebrate as well, because it’s the fourth time this has happened to the club, it’s a pretty momentous day. There’s a couple of guys there who might potentially come into the mix. We’ll try and get a team that is fresh and hungry to go out and do the business. It’s back at the RDS and the last time we played there we got beaten by Treviso. That’s still fresh in the memory,” said Cullen, who also cited last season’s home semi-final defeat to the Scarlets.

“In many ways it’s a mental challenge more than a physical one, because the guys got a good physical workout today. Naturally, there’ll be hype on Leinster now and Munster are waiting in the background,” he added, noting how Leinster had been in that position in his playing days when Munster were top dogs.

Leinster’s climb to the ascent of European rugby is all the more remarkable given the low of two seasons ago, when Leinster won one of six pool games. Yet the roots of this triumph can perhaps be traced to that sole win over Bath, with eight players under 24, of whom six were making their first European starts.

One of them, Luke McGrath, recalled that “brilliant day” and spoke of the influence Stuart Lancaster has exerted in the last two seasons. “He’s come in and changed our whole shape, our whole game, especially unstructured,” said McGrath. “Training has gone up another level. There is so much competition for places. He’s been brilliant.”

Lancaster has been an ideal fit for Leinster and they for him, and it was heartening to hear the coach commit “100 per cent to the province next season”.

This win, like so many others, was formulated from early in each of the last two weeks, with what the Leinster players call “Stuesdays”. Long after the dust had settled, Lancaster re-emerged with the trophy, brandishing it to the few Leinster supporters still in the San Mamés Stadium and going over to his two kids, both clad in Leinster blue.

No less than Cullen, this is a story of redemption of sorts for a good man and a fine coach. And for all involved, a fourth gold star forever more.