All smiles, Donnacha Ryan shines in the spotlight at Racing 92

‘He brings a very high level with a lot of intensity and precision,’ says Laurent Travers 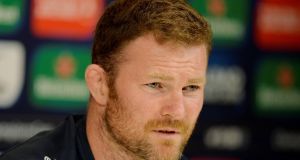 Donnacha Ryan: “It’s important that I bring the intensity, which is the easiest part of being a rugby player – you love playing. As a job it is fantastic.” Photograph: Vincent West/Reuters

Incredible just about covers the journey so far.

At least Donnacha Ryan won’t know the Leinster calls. In Bordeaux he stood waiting for CJ Stander to barrel through the middle of the lineout. The Tipperary hurler buried his former teammate to deny Munster a clean route back into the semi-final.

Now look at him, giggling away on the top table alongside Racing 92 coach Laurent Travers and captain Yannick Nyanga, perhaps pinching himself at the situation he’s gone and landed in.

“It’s been different alright, I wouldn’t like that level of scrutiny,” he says about all the fuss. “It’s important that I bring the intensity, which is the easiest part of being a rugby player – you love playing. As a job it is fantastic.”

The increased salary helps, but this evening’s game is why he emigrated. To make the job work for him for a change. His reward is deserved after all the foot problems and having to wait patiently, for far too long, behind the impregnable O’Connell and O’Callaghan wall.

“He brings a very high level, this British experience or Irish experience with a lot of intensity and precision,” goes Travers before apologising for the slip of the tongue.

The Éire Óg sliotar, probably hidden in his pocket, should remind them where he hails from, but he does not care. He can’t stop smiling. A journalist wonders out loud what is his primary duty in Paris.

“Definitely my footballing skills, my offloading...”

Still grinning from ear to ear.

“Ah no predominantly it is tackling and rucking. I don’t really get to do the flashy stuff. I’ll leave the offloads to Leone (Nakarawa).”

Ryan’s giant Fijian locking partner likes to walk bare-chested around the changing room with his Olympic gold medal from Rio on show.

“Leone, I’ll talk about the person first. He greets you every morning with a big hug which is very unusual but it’s absolutely incredible, puts a smile on your face. You see these guys and see they are so talented and wonder what their work ethic is like. Then you see how hard they train. It gives me confirmation of how hard you have to work to get up to their level.

“Unfortunately I don’t have octopus hands to get those offloads away. He’s exciting to play alongside. It’s a different second row partner than what I had but one that I am enjoying a lot.”

Bilbao offers a sliding door moment. What if he stayed home and struck up a double act with James Ryan? Could still happen. What if he’s so outstanding on this Champions Cup stage that Joe Schmidt bends the foreign club rule to bring a 35-year-old Munster dog to Japan next year? If only.

“James has had an incredible season. I had the opportunity to play against him in a development game about two years ago.”

On May 16th 2016, before Ryan led the Ireland under-20s to a World Cup final, the Ryans mixed it down in Thomond Park as Donnacha needed some flogging after concussion.

“The Munster boys were telling me during the Six Nations that his GPS scores were incredible. He’s playing alongside the most successful Irish secondrow...”

“...Devin has won everything so far.”

The incredible is promised from at least one Ryan.