Former All Black legend has played his last game for Racing 92, Rémi Talès replaces him 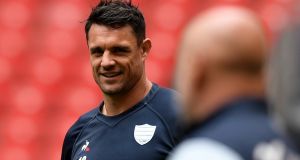 Racing 92 will be without New Zealander Dan Carter in the Champions Cup final. Photograph: Getty Images

Dan Carter has been ruled out of Saturday’s Champions Cup final due to a hamstring injury.

Rémi Talès replaces him on the Racing 92 bench for their decider against Leinster at San Mamés Stadium in Bilbao (kick-off 4.45pm).

Carter will leave the French club at the end of the season after signing a two-year deal with Japanese side Kobe Steelers.

The 36 year-old former All Black outhalf was hoping to end his top-class rugby career with one of the few medals that has so far eluded hin.

He has won 112 caps, nine Rugby Championships and two World Cups with New Zealand; three World Player of the Year awards - evenly spread from 2005, 2012 and 2015 - four Super Rugby titles with the Crusaders and two Top14 wins with Perpignan and Racing.

Chelsea get over early setback to go back top of Premier League 22:24
Robbie McDaid announces himself as the next Dublin man to come around 21:16
Dublin pick Cavan off with precision and turn it in to a procession by the end 20:46
Manchester United roar back as Rashford seals win over West Ham 19:41
Wales finally pull clear of Italy’s grip in another lacklustre display 19:22
Crossword Get access to over 6,000 interactive crosswords