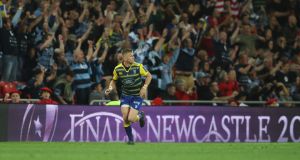 If Gloucester could play at their thrilling best for an entire game, they would collect trophies by the shed load. There were times when they looked set to win a highly entertaining European Challenge Cup final by a significant margin, only for a breathless Cardiff Blues comeback to ruin the Cherry and Whites’ bid to secure victory in this tournament for a record-equalling third title.

Only Gloucester could lead a big European game 20-6 at half-time and still blow it. First-half tries from Henry Trinder and Mark Atkinson, plus a total of 15 points from Billy Twelvetrees, had threatened to win them the game at a canter only for their Welsh opponents to come storming backand nick the trophy in stunning fashion with a 79th-minute angled penalty from a nerveless Gareth Anscombe.

Taking both finals to Bilbao has been questioned in some quarters but they enjoy their sport with a bit of edge in the Basque region. Pamplona’s bulls are down the road and in the game of pelota, another favoured local activity, the ball often travels at 120mph or more. If rugby wants to become a mainstream sport in these parts, it needs to come laced with risk and excitement.

With both sides also already qualified for next season’s Champions’ Cup there was a collective licence to thrill from the start. With Cardiff still reeling from the early loss of Josh Navidi with his right arm in a makeshift sling, a pinpoint cross-kick from Billy Burns to the left corner was splendidly gathered by a flying Trinder and Twelvetrees’s touchline conversion was a similar gem. Had Blaine Scully not failed to ground the ball under pressure from Callum Braley the opening stages would have been still more spectacular.

On a lovely still evening in one of Europe’s more appealing stadiums, Cardiff did manage two first-quarter penalties from Jarrod Evans but were mostly kept penned in their own half. Twelvetrees extended his side’s lead after a prolonged period of pressure and Gloucester forwards, led by the busy Ed Slater, appeared livelier.

Gloucester were unlucky not to be awarded another try on the half hour when Josh Hohneck’s fine back-of-the-hand offload to a charging Lewis Ludlow was harshly pronounced forward by the referee Jérôme Garcès. With Lane also having been forced off prematurely with an apparent shoulder injury, Cardiff needed all the breaks they could find.

Their task became tougher when Gloucester strung together a team try good enough to grace any final. Clever play in the 13 channel by the excellent Twelvetrees put Trinder away down the left and the supporting Braley sent Atkinson under the sticks. Twelvetrees’s conversion and a further penalty sent his side in at half-time with a 20-6 lead and the trophy seemingly in the bag.

As ever with Gloucester, it was not that simple. Tomos Williams grabbed an opportunist try back, helped slightly by the loose ball he was chasing ricocheting back to him off the goalpost padding, and Evans’s clever grubber kick set up a 54th-minute try for replacement Garyn Smith, awarded despite more than hint of offside.

With Evans adding the conversion to another penalty, the Blues were suddenly ahead 23-21 only for a well-organised Gloucesterlineout drive to yield a relieving try for their Australian hooker James Hanson. Twelvetrees’s conversion and third penalty restored a further measure of calm but the last laugh belonged to the Welsh.