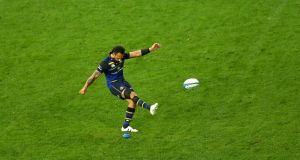 Not their best performance of the season, but Leinster showed another side to their nerve and character to earn that fourth star on their jerseys. The best side in Europe are European Champions Cup winners again, and as when claiming their first in 2009, many of them were again backing up a Grand Slam in an Irish rugby season that keeps on giving.

Ultimately, Leinster were kept tryless in what was unsurprisingly a taut, chess-like final, and they only led for less than two minutes. But Isa Nacewa’s second penalty in his final European Cup, to augment three earlier ones by Johnny Sexton, saw then snatch the game from Racing, whose cool and composed understudy scrum-half Teddy Iribaren had kicked four penalties.

Nacewa, Sexton, who unwaveringly gave it his all as usual, Cian Healy and Devin Toner, thus all become four-time winners, along with an exceptional batch of new products from their unequalled system who playing their first final. Not that you’d have guessed it, least of all James Ryan.

The 21-year-old lock produced another tour de force, although that almost goes without saying, winning countless collisions whether in carrying or tackling. Dan Leavy also had another monster game, leading Leinster’s carrying and tackle count with 17 apiece, albeit he conceded three penalties. These two have almost become standard bearers. Sean Cronin and Scott Fardy also had big games, while although largely stifled Garry Ringrose kept going and eventually made some crucial inroads.

This went a long way to Leinster had just about the better of an 80 minute battle for every inch going. Amazingly Ryan has now won 21 out of 21 professional matches with province and country.

Leinster’s defence contained the threat of Racing’s x-factor players Leone Nakarawa, Virimi Vakatawa and Teddy Thomas, but their own attacking game was largely stymied by Racing. Racing, true to expectations, brought relentlessly quick line speed and accurate tackling, while often succeeding in latching onto the ball sufficiently to regularly take the tempo out of Leinster’s game. That said, their line speed came at a cost for it contributed hugely to the 13-10 penalty count against them.

The stop-start nature of the game, with Wayne Barnes at his most fastidious, and the scrums taking age to set and often re-set, did not suit Leinster. Such was the accuracy of the clearing out that both sides recycled the ball superbly, but there were only three line breaks in the match - two to Leinster.

Sadly, there would no fairytale Euro farewell for the great Dan Carter due to a hamstring injury. Rémi Talès replaced him on the bench but this was swiftly compounded by Pat Lambie seeming to suffer a knee injury in stepping Rob Kearney. And so Talès was on the pitch inside three minutes.

Whether or not Lambie was to have been the first choice kicker in the absence Maxime Machenaud, it was Iribaren - another uber cool product off the French conveyor belt of left-footed goal-kicking scrum-halves - who assumed the role as Lambie was being helped off, landing a sweetly struck penalty following Garry Ringrose’s high tackle on Vakatawa.

Iribaren followed that up with an equally well-struck, one bounce touchfinder inside the Leinster 22. What looked like a legitimate steal by Toner on Donnacha Ryan was instead deemed a penalty by Barnes and/or his assistant JP Doyle, even though it was Ryan’s own lifters who let him drop to the ground.

Although under pressure, the Leinster line-out was coping well, and they hit back with a well-crafted strike move when Sexton wrapped around Fardy and passed out the back to Robbie Henshaw, who released Nacewa. He sped through a gap before being collared by Teddy Thomas and Iribaren, and Leavy nearly pierced the Racing defensive line with one of his flat to the gain line charges before Racing fired up too soon. Sexton drew the sides level.

Barnes then penalised Leinster for lifting too soon at a line-out, leading to Iribaren restoring Racing’s lead, before Leinster twice launched multi phase attacks, Ryan following up Sexton’s bomb with a big hit on Vakatawa, and Fardy latching on to Larmour to generate some go-forward, but that attack foundered when Barnes deemed that Fardy had neck-rolled Camille Chat

After Rob Kearney superbly reclaimed a Luke McGrath box kick, curiously Sexton turned down a likely equalising three-pointer when feinting to kick a penalty into the corner, then tapped and fed Leavy. But for once Ryan and Toner missed their clear-out, and Chat latched over the ball to win a turnover penalty.

When Leinster came calling off another line-out after a high tackle by Talès on Henshaw, Nakarawa reached out with one hand to bat down McGrath’s pass. It was as clear a deliberate knock on as you’ll see, and should have been a yellow card all day long, every day of the week. But Barnes and his officials decreed it merely worthy of a penalty, which Sexton landed to make 6-6l at half-time, a poor return for all Leinster’s possession and terrtiory.

On the resumption though, Nacewa twice kicked out on the full either side of Leavy being penalised for pulling the ball back into a ruck after a good carry when no-one filled in at scrum-half. Racing went through their first concerted foray into the Leinster 22, Henshaw making a big tackle on Thomas, before Iribaren kicked a penalty against Jordi Murphy for not rolling away.

Sexton then opted for a shot from almost half-way but miscued completely, before Kearney countered strongly and Leinster got their rumblers - Leavy, Healy, Cronin, Fardy and Ringrose - going. And when Eddy Ben Arous was penalised for offside and playing a man off the ball, Sexton drew the sides level for a third time.

However, he was just wide from almost halfway soon after, which was where the Racing defence were keeping them, before Iribaren was also wide after Leavy’s high tackle on Chavancy.

Far from breaking free, the game was becoming more and more taut. When Racing came calling again, Iribaren’s penchant for leaving the ball unprotected at the base eventually led to Fardy stealing possession, but successive penalties, for a high tackle by Kearney and Andrew Porter for pulling down a Racing maul, and Iribaren kicked them in front for a fourth time.

Nice work by Ringrose and Leavy released Fardy for a gallop with Jamison Gibson-Park in support - Leinster’s first real attack of the half - ended with Racing again pushing up offside, and Nacewa assumed the kicking duties to haul them level again.

Thomas negated a line-out steal by Nakarawa by dancing back to the touchline and was tackled into touch by Jack Conan. Plain daft, and costly. Ringrose breached the defensive line and when Talès strayed offside, Nacewa edged Leinster in front for the first time.

Racing reclaimed Talès’ restart up the middle and went through the phases, but with the 80 minutes up, Talès was wide with a drop goal from 45 metres. As he and several of his teammates sank to their knees, the Leinster players on the sideline invaded the pitch.

Nacewa, classily ran over to embrace Thomas and have a few words with his losing counterpart, who will not enjoy the video replay of this one. In all probability, his mistake also denied us extra-time. Phew indeed.