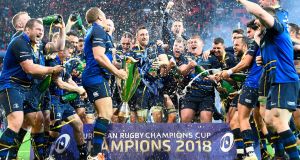 Leinster are kings of Europe for a record-equalling fourth time, after Saturday’s edgy 15-12 win over Racing 92 in a soaked Bilbao.

The province are now level on Champions Cup titles with continental aristocrats Toulouse - they are at the head of European rugby’s top table.

Leo Cullen’s side were made to work for their narrow victory at the San Mamés Stadium, not leading until Isa Nacewa knocked over the match-winning penalty in the 78th minute.

The Parisians turned the European Cup showpiece into a taut, frayed battle - dragging Leinster into the mire and into a battle of muscle and will.

And it was nearly enough to cause one of the great upsets - Leinster were priced at 1-6 before the game, after making mincemeat of Europe’s finest on their run to the final.

Indeed, in the pool stages the province beet the reigning English champions Exeter, as well as Glasgow Warriors and Montpellier - who currently lead the Top 14 - home and away.

Simply put, they beat the best.

Leinster’s gutsy performance in the pouring rain, capping off one of the truly great European campaigns, has earned them plaudits from all around Europe.

And it was the latest act in one of the greatest seasons in Irish rugby - leaving the rest of the northern hemisphere nations looking on enviously.

Indeed, in the Observer, Rob Kitson writes: “Irish rugby’s remarkable year shows absolutely no sign of ending. By no stretch of the imagination was this a classic final but it is impossible to deny the scale of Leinster’s achievement in becoming only the second team in history to win four European Cups. Given Ireland’s Six Nations grand slam and potentially a Pro14 title as well, the 2017-18 season has been a rhapsody in green and blue.

“While the margins in Bilbao were distinctly slim, the soon-to-retire Isa Nacewa slotting the winning penalty with less than two minutes remaining, there can be no disputing Leinster’s consistency.

“Despite being drawn in a horribly tough pool they have emerged with a 100 per cent record from their nine matches, emulating the feat previously achieved only by Saracens two years ago. Significantly, they also possess enough youthful talent to continue winning for the foreseeable future.”

Elsewhere on rugbyrama.fr - the website of rugby newspaper Midi-Olympique - Simon Valzer has praised Leinster’s rise back to the top, and writes that while the province’s season is not yet over, the “sacred monsters” of European rugby should celebrate their latest coronation.

Meanwhile his colleague Anthony Tallieu laments Racing’s loss of Dan Carter and then Pat Lambie, which led to a telling absence of creativity in a game which was “not made for the artists.”

He writes: “The absence of these two world-class players inevitably weighed heavy on the attacking output of Racing 92. Would they have been crowned champions of Europe without these two cruel blows? We’ll never know.”

Leinster’s run to the final was often thrilling but their win over Racing 92 showed their ability to win ugly, something Chris Foy pays tribute to in the Daily Mail (UK).

He writes: “But Leinster did what champion teams do; they found a way to win when well below their best. This was a triumph of character. They stayed in the fight, even when the ferocity of the opposition defence was forcing them into an uncharacteristic stream of errors. It was a gutsy effort, if not much more than that.”

And this is echoed by Iain Morrison in The Scotsman: “Racing played well but the truth is that Leinster won despite playing poorly; something for everyone else to chew on.

“Like all great comics, the Dubliners maintain a great sense of timing. They didn’t take the lead until the 78th minute and when they did get their nose in front they were able to stay there.”

A richly-deserved fourth European crown for Leinster - and surely not the last.