Andy Farrell may take Ireland mantle if Schmidt steps down 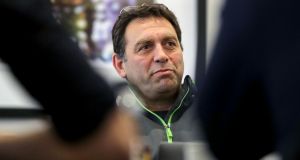 David Nucifora: “He [Schmidt] is his own man, and he could very well surprise us all at the last minute and say that he wants to stay on for another term.” Photograph: Dan Sheridan/Inpho

David Nucifora, the IRFU’s high performance director, has dropped the broadest of hints that if Joe Schmidt does end his time as Ireland’s head coach after next year’s World Cup, then his successor will most likely come from within the existing coaching staff.

In other words, Andy Farrell would be the heir apparent.

Nucifora maintained that it was not a given Schmidt will move on in 16 months’ time, and added that the IRFU will do all they can to keep him. Aside from tempting offers in New Zealand, it’s believed Schmidt has also turned down more lucrative offers in England and France to remain with Ireland. So it’s not a question of the IRFU breaking the bank.

“I don’t think it’s money that really drives Joe. That’s not him,” ventured Nucifora in a briefing with the travelling Irish media in Sydney yesterday.

“What really drives him? The opportunity to be successful is what drives most coaches. They want to win. Like players, they want to win. So, I suggest that if he feels that he’s done everything that he can do and achieved everything he can do, that he may look to go. But he’s his own man, and he could very well surprise us all at the last minute and say that he wants to stay on for another term.”

By the end of the World Cup, Schmidt will have been Irish head coach for five and a half seasons, having previously been three years each at Clermont and Leinster, and with his wife Kellie will have been based away from New Zealand for 11½ years.

“I think all the talk at the moment is about him moving on, purely because he has been here so long,” said Nucifora. “But if I was a betting man, I wouldn’t know where to put my money at the moment. I think there’s a decent chance that he will stay. So, we’ll see.”

Nucifora believes Schmidt’s decision will be finalised “at some point before the World Cup”, and if he does leave, ala the All Blacks model, his successor could come from within the existing Irish coaching group.

Nucifora hailed Schmidt’s decision to start Joey Carbery in the first Test. Carbery’s move to Munster was part of the a three-year strategy by the IRFU in identifying talented players in need of game time, which has underpinned much of this season’s success.

“I don’t think we need a complete draft system,” said Nucifora. “No one wants to take away the identity of the teams but at the same time no one wants to see the Ireland team doing poorly and if we don’t make the right decisions out of the right times, it’s no good us sitting back in 2019 having a whinge about why something didn’t work and why we got knocked out in the quarter-finals again.

“We are not New Zealand and we’re not trying to create a New Zealand system,” added Nucifroa.

“We’ve got an Irish system. It’s carefully balanced around the need for movement and for opportunity and for development, while keeping the parochialism within the provinces that drives them. Let’s not get to a point where it becomes a handbrake or a hurdle for us. It’s got to work hand-in-hand with where we are all going.”

Nucifora also said the results of a broad review into the women’s game after the Women’s World Cup, and with it a resulting strategy, will be revealed in September. The IRFU turned down an offer to play three Tests against Australia in tandem with the men’s series, which Nucifora said suited Australia’s needs more.

“At the moment, our staff and players are just finishing preparing for the World Series and the World Cup and we wouldn’t have a full list of players available if we were coming down here even before we look at the financial cost of sending a team down here.

“Our focus at the elite end of the game is on playing two Test matches in November this year. One has been announced, the other will be shortly, and that’s a far better preparation for us leading into the Six Nations. ”

Asked was he surprised some current players expressed disappointment with this decision, Nucifora said: “I’m not surprised but I think unless you have all the facts, it’s like people who comment on anything without all the facts, it was probably sensationalised a little bit.

“We’ve got a plan. Do we accept invitations? We have a lot of invitations that come in for a lot of our teams to do different things and we have to have a look at the invitation and see if they fit strategically into what we’ve got planned. This one didn’t.

“That’s not the way we do our business. We have a plan, we have a strategy, and if it fits, we’ll look at it. If it doesn’t fit, we’ll choose to do what does fit and what’s best for us, not what’s best for Australia or anyone else.”

With the B&I Cup no more, Nucifora also confirmed that a new, eight-team, Irish/Welsh competition, for the provincial ‘A’ sides, will be run off in seven consecutive weeks from September through to the second round of European matches.

“Our ambition is that the A-League would complement the AIL and to eventually run seamlessly into each other; allowing for the best players not playing Pro 14 week-to-week to be available to play club rugby,” said Nucifora.

To that end, they had met with the provinces and will do so with “the existing top 20 clubs”, with Nucifora adding: “There’s regulations that exist at the moment that actually restrict players [from playing] and I wouldn’t be a great fan of regulations that restrict people from playing the game. So if we can deregulate and give opportunity for our best players to be playing, that’s only going to strengthen the club game.

“I think it’s an exciting opportunity for the game. No guarantees we can pull it off, but we’re going to give it a shock and see what we get to.”