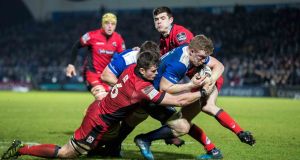 Dan Leavy scores a try for Leinster against Edinburgh in the Pro12 at the RDS last month. Photograph: Morgan Treacy/Inpho.

Dan Leavy is learning how to manage it. But the 24th man on an Irish squad can be a difficult place to be. You do the training and drills, learn the calls and even warm up for the match. But when the others are lining up to walk out, the 24th man takes a shower.

For Leavy, though, it has been a progression rather than a failing. This season the flanker, who has remained healthy, has kicked on dramatically, hovering around the squad and breathing the air at the team base in Kildare.

It is, he says, bitter sweet to be so close but not involved in the main act. But in an Irish backrow deep with talent, there is a logic, if not a welcome one, to his current teetering on the cusp.

“Obviously it comes with a bit of frustration being that close and not actually pulling on a match jersey, but it’s another step in the right direction,” he says.

“I had a few pretty frustrating years watching other lads kick on and I was left behind. But I am getting a lot more game-time this year with [Leinster coach] Leo [Cullen] and the more time you’re on the pitch, keeping fit the more of an opportunity and window you have to showcase your talent.”

Leavy, capped in 2016 against Canada, is available for Leinster, who play Scarlets this week. He has had his talks with Joe Schmidt and even if Schmidt’s in situ backrow stays fit and healthy and Leavy keeps getting just as far as the match-day warm up, the summer and Ireland’s trip to Japan and the USA might provide an easier entry point.

With the Lions tour looming, the more successful Ireland are in this Six Nations Championship the better for Leavy. Barring any eccentricities in Warren Gatland’s selection, there should be vacancies created. The summer tour is a target.

“Yeah it always has been,” he says. “With the form some of the backrows are on the Lions could be calling them. If that is the case there will be another spot on the trip going to the States and Japan. It would be brilliant to be involved in that in some capacity.

“I do all of the hard work with Ireland, all the tough training at the start of the week and then I’m sometimes released back to Leinster and I have a day or two to get back into the system.

“I know what the intensity is like. I’d slot in pretty seamlessly with them. I have to wait for my opportunity, showcase my talent and play the way I know I can. Even in the warm up against France I was ready to play a match and I felt really comfortable. Just dying to play.”

Leavy knows Seán O’Brien has the shirt and barring injury will hold it. It’s a test of patience for him, a frustration too and he understands how coaches Cullen and Schmidt stand behind players who have delivered for them before, especially iconic figures from Tullow.

“There is going to be a degree of loyalty from coaches to players. Seanie is a world-class player. Everybody knows it,” says Leavy.

“Why is he going to throw a young player out there in front of a vet? You have to push above the level to kind of take the decision away from him.”

Brave thinking from the 24th man and why not?