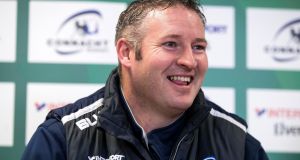 Connacht forwards coach Jimmy Duffy: “Everyone is coming off the injury list and competition is getting better and better, and we are seeing the benefits on the field.” Photograph: Tommy Dickson/Inpho

An improving injury list is helping to drive Connacht’s hopes of Champions Cup qualification heading into the end of the regular season.

As Connacht look to extend their recent run of Pro 12 wins to four when Zebre visit the Sportsground on Friday, forwards coach Jimmy Duffy says the players are behind the recent improvements.

“A lot of stuff is peripheral, but the big one is that the boys are in a good space to perform at the weekend, and they are enjoying their rugby, and that is shining through.”

Although counting the cost of a poor start to the season, Connacht can still qualify either automatically or by play-off if they maintain their recent form. Their cause has been helped by an improving injury list.

“We have two good unit sessions, pretty physical and intense. The fact that everyone is coming off the injury list – as you can see it is shrinking massively – and competition is getting better and better, and we are seeing the benefits on the field,” said Duffy.

“It is coming from the players at the minute. The management would always speak about it, as coaches and management, but it is what is not being said. It is the competition.

After a season hampered by injuries, Duffy believes the improving squad numbers is key.

“I keep going back to competition. It is marked in the last number of weeks with having a number of bodies back, and quality of the likes of Eoghan Masterson, players with experience and credit in the bank, so it drives the standard of training up, and we are learning something every day as a coach and players, and that is the most rewarding things for us.”

Connacht will benefit this week from that improving injury list with the return of Masterson, who suffered a serious knee injury against Zebre in Italy last season. However Nepia Fox Matamua is the latest casualty– also suffering a knee injury – which is being monitored this week.

Out of action are Jake Heenan (ankle), Cian Kelleher (hamstring in training), Matt Healy (thigh strain). On the plus side Josh Rowland, who has yet to play for Connacht, has integrated into squad training this week, as has Ivan Soroko and Marnitz Boscoff. Both Darragh Leader (Galwegians) and Eoin Griffin (Buccaneers) will line out for their clubs.