Belvedere and Blackrock set to serve up cracking schools final 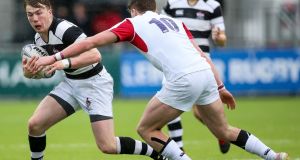 It’s a reprise of last year’s final, which Belvedere College won 10-3, with a smattering of the same cast, split between the teams.

The champions will be seeking their third successive title – it’s their fourth final in succession – something that they have never previously achieved. And if Belvedere are successful it could take them past the double-winning teams of 1923-1924, 1971-1972 and 2016-2017.

Head coach Phil Werahiko has overseen the most recent chapter of success but even he mightn’t have invested too much hope in a final gamble when summoning five players from the bench simultaneously when trailing St Michael’s 19-3 in the semi-final. The comeback will bear retelling through the games for all but Michael’s pupils as Belvedere squeezed out a 20-19 victory.

David Hawkshaw is a fine all-round sportsman, having played representative rugby for Leinster and hurling for Dublin. The outhalf damaged a shoulder in the first match of the Cup but is named in the team for the final. His presence and experience in finals would be a massive boost for the team. Number eight Ruadhan Byron is the only other survivor from last year’s final in the starting team.

Blackrock College are chasing a 69th title, a first since 2014 and are looking to complete a Junior and Senior Cup double with the former age-group having already won their final. Coach Justin Vanstone’s senior team has two starters from last year’s team, talented captain and centre Liam Turner and Tom Maher, who joins the Leinster player in midfield.

The team struggled a little defensively in the victory over Castleknock and were somewhat fortunate to escape to a 19-17 win over St Gerard’s. But with the return of number eight Ed Brennan, loosehead prop Donnacha Mescal and wing Liam McMahon from injury as well as Louis O’Reilly coming in at scrumhalf in the semi-final against St Mary’s they produced a superb performance.

The expectation is for a cracking contest.

Paths to the Final: