Bundee Aki out of Connacht team due to head injury 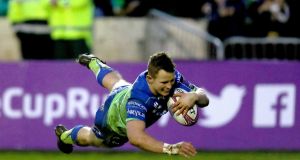 No Bundee Aki as he follows return-to-play protocols after a head injury against England, and no Kieran Marmion or Ultan Dillane as Connacht rest frontline players before next week’s Challenge Cup quarter-final. Quinn Roux is available, and starts in the secondrow.

That should not concern Matt Healy, who became Connacht’s top try-scoring player with two against Cheetahs. The winger now has 44 tries in 104 appearances, and lines out in a pacy back three with Niyi Adeolokun and fullback Tiernan O’Halloran.

However, Edinburgh, in the image of their coach Richard Cockerill, direct and confrontational, arrive with confidence from victory over Munster last time out. They have made five changes, with one of those the return from injury of international loosehead prop Darryl Marfo. Also travelling is Scotland’s Blair Kinghorn, joined in the back-three by Dougie Fife and Duhan van der Merwe, the latter grabbing a brace last weekend.

Hooker Neil Cochrane packs down in a revamped front row alongside Scotland internationals Marfo and Simon Berghan, while Grant Gilchrist and Ben Toolis fill the secondrow.

“Last week against Munster I just wanted the boys to go out there and play as well as they could. The effort was just unbelievable. It’s where we want to be,” said Cockerill. “We know how tough Connacht are – especially at home, where conditions aren’t always brilliant.”

Connacht are fifth in Conference, with Edinburgh holding third position in Conference B with wins over Munster, Dragons and Ulster in their last three matches.