Redevelopment of RDS on hold until funding is secured 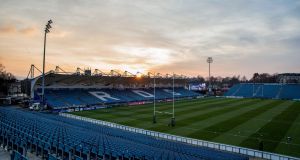 Leinster hope to complete the redevelopment of the RDS by September 2020. Photograph: Gary Carr/Inpho. Luke McGrath should be available to face the Ospreys in the Guinness Pro14 this weekend. Photograph: Tommy Dickson/Inpho

Luke McGrath, Sean O’Brien and Rhys Ruddock could all be available for selection for Leinster’s Champions Cup quarter-final against Saracens at the Aviva stadium on Sunday week.

McGrath, who sustained a knee injury at the RDS in the first of two recent league matches against the Scarlets, is set to return for Leinster’s Guinness Pro14 clash with the Ospreys at the Liberty Stadium on Saturday, having fully integrated back into training.

O’Brien sustained a shoulder injury on his return from a hip problem in the second match against the Scarlets at Parc y Scarlets last month. Leinster head coach Leo Cullen explained: “He’s not a million miles away, (we’ll) see how he comes through the next few days.”

Ruddock (hamstring) is due back in team training later this week, and while not available – as is the case with O’Brien – for the Ospreys match could be considered for the Saracens tie, providing there is no adverse reaction to their respective injuries.

Cullen can call upon a number of his Irish squad contingent this weekend, who didn’t rack up significant minutes in the Six Nations for Ireland, presumably including Joey Carbery, Jordan Larmour, Andrew Porter, Jordi Murphy and Sean Cronin.

Off the pitch on a day when the province agreed a 10-year deal with Energia for the naming rights to Donnybrook, effective immediately – it is to be known henceforth as Energia Park - Leinster chief executive Mick Dawson also provided a briefing on the timeframe for the redevelopment of the RDS.

He explained: “We have planning permission. Everything is on hold at the moment for financial reasons. The next stage in that development is to actually go to tender but the RDS aren’t going to move to a tender process until they secure the money.

“So, the RDS are prepared to put capital into it, we have a naming rights partner in the deal and the Government have now announced that there’s a fund for major capital programmes.” Leinster and the RDS have engaged a company, Hume Brophy, to advise them through the process. An application for the grant must be filed next month.

The construction process would take 12-15 months and a ballpark date for completion would be September 2020. Dawson continued: “Our plan is that we would play during the build period, so knock the stand or even take a roof off the stand at some stage and build from September (2019) and you’d hope from the following September (2020) you’d be back with a new stand.

“It will (include corporate facilities). It’ll increase (the capacity) from about 18,500 maybe up to about 21,000 and with most of the increase being in the new stand facility with a corporate facility so it would just change the whole dynamic of the RDS. It would be a staged development, so you would have a new Anglesea Stand and I think ultimately as we get into that, we’d look at redeveloping the rest of the place.

“If the Government announced we’d get the money next June, July or whenever it was, you’d then have to go to tender, which means you have to engage your architects to do very detailed drawings, so I’d say realistically if you got it done by September 2020, that would be the best case scenario at the moment.”

Leinster will continue to play at the RDS during any construction with the capacity of the stadium – there would be some temporary seating installed – reduced by about 2,000 seats to 16,000.

1 The Offload: Philip Browne’s grave outlook should be taken seriously
2 Tiger shines and Brady bites back as charity match proves an enjoyable release
3 Ken Early: Liverpool fans, Bamber Gascoigne and a close shave in Istanbul
4 Coronavirus: Leinster cancel sale of season tickets for 2020-21
5 As news gets better, can the pull of The Field be resisted?
Real news has value SUBSCRIBE