After a Six Nations that will go down in the annals of history, Gerry Thornley selects his XV 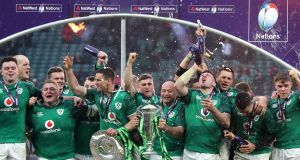 Nine Irish players have been included in our team of the tournament. Photograph: Gareth Fuller/PA Wire.

When it comes to picking the team of the tournament there’s a temptation to pick 15 Irish players. Their collective performance in winning five from five certainly justifies them dominating individually, and likewise, it’s almost impossible to split Conor Murray and Johnny Sexton for player of the tournament, but we’ll go with the latter for that nerveless quarterback impersonation in Paris and that drop goal.

The 21-year-old came into the tournament on the back of three cameos off the bench last November and impressed on his full debut against England with his footwork, counter-attacking and ability to hit the line, whereupon he augmented some try-saving last-ditch tackling by scoring tries in four successive games. In a strong category, Rob Kearney beat the most defenders (18) and Stuart Hogg made the most metres (479).

Although ‘aul man Earlsy’, as Joe Schmidt likes to call him, only scored one try, there could/should have been more but for the ball not coming his way. There was still that fantastic leap in Paris for Sexton’s cross kick in overtime, that 60 metre covering tackle on Tommaso Benvenuti, a couple more try-saving tackles on Elliot Daly and much more in a deserving first title/Slam of his career.

The Scottish-born, English educated, rugby product of Western Province was wrongly picked at inside centre against Wales, but flourished at ‘13’, igniting Scotland’s campaign by scoring a try against France and a wonderful first-half double against England. He also played a huge role in Sean Maitland’s try when he sped onto that Pass by Finn Russell.

Maintained the highest of standards while all around him seemed to be losing theirs. He put Italy to the sword on the opening weekend in Rome, and produced the kick of the tournament with that alert, perfectly executed long grubber for Jonny May’s try against Wales, almost dragged England back into the game against Scotland seemingly single-handedly and never shirked his responsibilities or workload.

By a distance. Some rookie. Some campaign. The young Ulster winger has an uncanny ability to seize the moment, be it his intercept try in the final play of the game against Wales, or his chip and score with the final play of the first-half against England. His defence is a work in progress but he scored more tries (seven) than anyone since the advent of the Six Nations, and also made more clean line breaks, 11, than anyone else. One problem: how to follow that? “We’ve won a Grand Slam and that’s the first stepping stone towards being a really dominant team in world rugby - we’re sitting number two and we’ll be excited to have a crack at New Zealand.” The fearlessness of youth.

When Anthony Belleau lined up his 78th minute penalty on the opening Saturday in the Stade de France, Ireland’s Grand Slam hopes appeared to be goosed. But Sexton was already plotting Ireland’s escape to victory. He told Iain Henderson where his restart was going, had the nerve to cross kick to Earls after the 80 minute mark, and then landed ‘That Drop Goal. In a mindset bordering on a rage for victory, he was as cold as ice. Thereafter Sexton was imperious in his marshalling of Ireland’s game, with his decision-making, goal-kicking and playmaking in every game.

Along with Sexton, Murray was again at the hub of Ireland’s game with his zippy passing, energy to every breakdown and running game. His kicking is a huge part of Ireland’s almost flawless exit strategy. He instigated and finished a lovely try against Italy, and along with Greig Laidlaw had the most try-scoring assists (four) in the tournament. At times he also filled into the defensive line, covered the back field and even won lineouts and kicked penalties, finishing with a 100 per cent kicking record!

Rumours of his demise have indeed proved premature. This campaign was an astonishing comeback for Healy. Above all else, he took care of basics, holding his own and forcing a succession of penalties at scrum time, but also chipped in with his usual quota of carries (averaging nine per game), a try against Wales and a high, and accurate tackle count (not missing one). After some injury troubled years, Healy was back to his very best.

He looked a busted flush after captaining France for so long through some grim times, but being re-united with his old Perpginan coach Jacques Brunel seemed to revive him. Guirado drew the line in the sand for Les Bleus with 31 tackles against Ireland, and no-one did more to inspire France in their win over Les Rosbifs with his carrying and big plays. He had made 59 tackles overall before being sidelined for the last game against Wales. Hard to think where France would be without this warrior.

A true jewel in Ireland’s crown and a true modern day prop, in that he scrummages and also has the mobility, work-rate and handling dexterity required of a tighthead nowadays - witness his playmaking partnership with Sexton and that deft transfer to Bundee Aki! In three and a bit games, he made 33 carries (some of which were Moss Keane-like) and 26 tackles, missing none. Thankfully, he doesn’t seem to take himself remotely seriously. Long may that and his form continue.

One could make an equally compelling case for Iain Henderson, who was outstanding in Twickenham. As eye-catching as Ryan’s work-rate is the sheer accuracy of his play. The 21-year-old made 51 carries in the four starts of his rookie campaign, for 75 metres, and he scarcely missed a beat or a tackle. To think, if he stays healthy, he can only get better.

A close call between the Welsh warrior and Jonny Gray, who led the tournament tackle count with 100. Jones was the standard bearer in the sleeves rolled up win over France last Saturday. He typified the Welsh resistance in Twickenham and Dublin, making 35 tackles in those two games and missing none, as well as being a go-to man in the lineout and an impressive, imposing captain.

Amid all the rookies, mostly Irish, who cut a swathe through the tournament, there was something heartening about a 30-year-old Pro14 stalwart finally availing of the chance afforded him by injuries to others. A wonderfully rangy runner, he almost inspired a Welsh comeback win in Twickenham with a typical break, scored a try against Ireland, stole more lineouts than anyone in the tournament and had a huge tackle count.

Akin to Shingler, it’s remarkable to think that Leavy mightn’t have featured much, or at all, but for the cruelly unlucky Sean O’Brien being ruled out of the tournament or Josh van der Flier following suit in the first-half in Paris. Whereupon Leavy stepped in immediately. Hard as nails, almost unmovable over the ball, a strong carrier, he scored a try against Wales and was consistently tough and durable. Yacouba Camara was also consistently inspiring for France, notably in their win over France.

No-one exemplifies what this Ireland team is about more than Munster’s adopted South African. The serial man-of-the-match performances are so taken for granted nowadays that he doesn’t win them anymore. For the second Six Nations in a row he made more carries (95) than any other player, and for a hard-earned 194 metres in total, topping it off with a fine try against England, when he also finished the game as captain.