Jordan Larmour: ‘I know it’s not always this easy’ 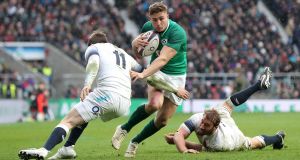 The whippersnappers of the Ireland rugby squad may legitimately question what all the fuss is about when it comes to a Grand Slam, particularly if they want to get a rise from some of their senior teammates who have toiled for the guts of a decade before realising the ultimate Six Nations Championship achievement.

Three caps into a test career, Jordan Larmour joins a very select Irish rugby cadre that incorporates those that negotiated a passage through the unbeaten campaigns of 1948 and 2009. It is impossible for the 20-year-old to put the Grand Slam in context as he is in the foothills of an international career.

He has never been on the losing side in an international so there is no counterpoint to the euphoria of winning. The carousel of success has kept spinning in his first season of senior test rugby. It is only the bones of a week after Ireland’s triumph at Twickenham and back in the colours of Leinster, that he’s been able to draw breath.

He describes the post-England buzz as a “crazy few days”. His family attended the game en masse, his brother the last to secure a golden ticket. His goals at the start of the season seem incredibly modest when weighed against how things transpired, but they were entirely reasonable giving his starting point.

A standout player during the Under-20 Six Nations last season, he missed out on the Junior World Cup to undergo ankle surgery, a disappointment at the time but, as he said, it allowed him to undergo a full pre-season.

He explained: “All I wanted to do was go to the World Cup with the U-20s. I weighed both options up as I would have had to get surgery on my ankle after the World Cup if I managed to go as I was trying to rehab it without the surgery.

“Looking back now, I’m glad I got the surgery done as I had a full pre-season under my belt and got my first start for Leinster at the start of the season. I never thought it would get to this stage so quickly. I was only playing U-20s last year and I remember just watching the senior team playing in their Six Nations.”

“I’ve always dreamt of being involved and playing for Ireland. I didn’t think it would happen this quickly, no, but I’m delighted it has.” He graduated from being an extra in Irish camp to a bona fide member, absorbing the minutiae to both justify the decision to include him and also to improve.

Ireland coach Joe Schmidt was a fan, from the moment he saw Larmour guest for a Blackrock College team playing a visiting team from New Zealand – Larmour went up to the Irish coach and asked for a picture after the game – through his performances for the Ireland U-20s. The young Leinster player relished the environment, the workload and the detail and also paid tribute to how receptive the coaches were to a young player looking to learn.

He elaborated: “Any questions I have I’ll ask him [Schmidt] and he’ll give me an answer. All the coaches I’ve worked with are like that. If I have a question or query, I’ll just go up and ask them and just get their view on it. He’s an unbelievable coach so I just want to learn as much as I can off him. It’s a good relationship.”

Larmour has fizzed in the Leinster jersey this season, encouraged in his swashbuckling style but he believes that he can bring the same attitude to the way he plays in the Ireland jersey. “I suppose the more you play, the more confidence you get. There’s a structure there and there’s a gameplan in place, but if there’s an opportunity to do something a bit different, take the opportunity.

“There is structure and things like that, but you can express yourself as well. That’s what the game of rugby is meant to be. You focus on what your job is within the team and what you need to do to try and achieve the goal that we had at hand.”

Any sympathy for the “old codgers” and the wait they endured to realise that ambition of winning a Grand Slam? He smiled: “Some of the guys were laughing, saying that it’s not always this easy, and I know it’s not because I watched Ireland win the Grand Slam in 2009.

“Then nine years later, to see how much work [is involved] and how hard it is to go and win a Grand Slam, especially going away to France and England. We know it’s not going to be that easy every time.

“When I got on, everyone was just calm and we felt in control of the game. That was a big thing. Then when the final whistle went it was just an amazing feeling, and to see how much it meant to some of the senior players who had been trying for nine years. It was special. Hopefully there will be more to come.”