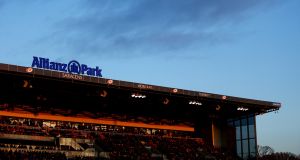 Last May, English rugby celebrated a double double. Saracens retained the European Champions Cup a couple of months after England had held on to the Six Nations title. In two years, they had lost one match between them in the tournaments, the international against Ireland in Dublin that March.

Five Saracens were involved in England’s 2017 Six Nations campaign, a sixth, George Kruis, was named with the quintet in the Lions’ squad for the tour to New Zealand – Billy Vunipola pulled out – and a seventh, Alex Lozowski, went on England’s tour to Argentina.

In two seasons, Saracens had lost only four league matches when all their international players were available and in one, at Wasps last May, they fielded a weakened side. Their England players had become used to not losing – Owen Farrell went more than a year without tasting defeat – but that feeling of indestructibility has been shattered this season.

Sarries sneaked into the quarter-finals of the Champions Cup through the back door, doubled by Clermont Auvergne at the group stage and drawing with Ospreys, having held on at home to the Welsh region by two points. Their only comfort came against another Premiership club, Northampton, who supplied them with 10 points.

On Easter Sunday, Saracens will be in Dublin looking to do what England could not this year or last and defeat an Irish team. They overcame Munster in the 2017 Champions Cup semi-final at the Aviva Stadium but it will take more to beat Leinster, a side who combine Ireland’s ball-retaining capacity with greater risk-taking.

It was only two seasons ago that Leinster finished at the bottom of their European pool. Munster and Ulster also failed to qualify for the knockout stage while the Premiership had five clubs in the last eight and the Top 14 the other three. The theory then was that money was talking but when the tournament resumes on Good Friday, Saracens are England’s only representatives.

Munster and Leinster will enjoy home advantage along with the Scarlets and Clermont Auvergne. For the first time since the Six Nations started in 2000, the Celtic countries filled the top three positions. The sense of despondency has lifted and a theory now is that the co-operation in the professional game in Ireland, in particular, Scotland and Wales, where the influence of the national coaches extends beyond the international arena and players have tailored programmes to ensure they are regularly rested, gives them a marked advantage over England, especially in the year after a Lions tour.

This has been the most challenging season for Saracens this decade: they have lost six Premiership matches, injuries to back-up players hindering them in the autumn and during the Six Nations, and are third in the table as the closing stages of the regular campaign beckon. They are not in a position to rest their leading players this weekend against Harlequins: it is not only that they need the victory but they need to reassimilate their international contingent who have not played for the club since the third week of January before the quarter-final against Leinster.

Saracens’ problems reflect England’s. As the ball in play time rises, defences are put under greater stress. Saracens only conceded one bonus-point try last season in the league and Europe, at Wasps when they rested nine of the players who had won the European semi-final against Munster, but this season’s figure is four.

England and Saracens are structured sides. So are Ireland but they are adept at retaining possession. If fatigue is a factor behind the English game’s descent this season, mental and physical, so, too, is the tactical shift in the game. What worked a year ago does not necessarily do so now: it will probably be the same in 12 months, which is why it is premature to write off England, never mind Saracens.

Their quarter-final against Leinster will be a club version of Ireland against England, the ball-retaining capacity of the former against the constricting defence of the holders. Like England, Saracens do not employ a fetcher on the openside and, like England again, they have missed the No 8 Billy Vunipola.

The success of England and Saracens last season was down in no small measure to their ability to create from set pieces but as the ball in play time has steadily increased, it is estimated that 80 per cent of a match is unstructured, one reason why Eddie Jones since he started with England has constantly stressed the need for players able to think on their feet rather than obey orders.

That makes turnover possession more valuable than ball from the scrum or lineout. Leinster mirror Ireland in their ability to retain possession and take play through multiple phases, so dictating the pace of the game. Their clear-out at the breakdown ensures speed of delivery and they have lost only three matches all season, two during the international windows.

A difference between the game in the two countries is that the Ireland head coach, Joe Schmidt, has authority over the provinces but his England opposite number Jones’s sway starts and ends with the national side. Jones has not tried to fight that, knowing that the best battles to pick are the ones you can win, but many of his problems are those confronting Saracens and the other Premiership clubs, ones that are most readily solved together.

1 Tianna Bartoletta: ‘After you’ve gotten your medal, you become black in America again’
2 Betting shops face uncertain future as they prepare for Monday reopening
3 Ian O’Riordan: An education in race and running during college days in America
4 Timo Werner giving up on Liverpool dream on path to being truly wanted
5 Sports bodies must keep electronic records of participants as training sessions resume
Real news has value SUBSCRIBE