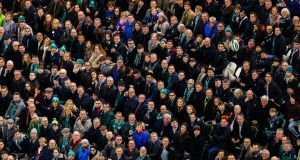 Aviva Stadium: Many 10-year ticket holders for international rugby games in the Aviva Stadium are seeking clarity on what the IRFU intend to do with regard to the €15,000 per ticket they are paying. Photograph: Tommy Dickson/Inpho

As the financial effects of the pandemic continue to hit sport with the IRFU scheduling a meeting later this week to allay the fears of their 10-year ticket holders, Leinster have cancelled their entire season tickets for the 2020-21 season.

“There is a meeting to address the approach on 10-year tickets later this week,” said an IRFU spokesman on Monday. “The Union will be correspond with ticket holders following that as to the updated position.”

Many of the new 10-year ticket holders for international rugby matches in the Aviva Stadium are urgently seeking clarity on what the IRFU intend to do with regard to the €15,000 per ticket they are paying the Union with no rugby currently being played and possibly no matches in the autumn schedule.

The final date for completion of payment in Option One of the three paying options is June 1st. Patrons are asking if the final payment of €8,700 should be made or withheld if no rugby is taking place.

So far Ireland played at home in the 2020 Six Nations Championship against Scotland on February 1st and against Wales on February 8th before the third match against Italy was postponed on March 7th.

The remaining 30,000 seats (approximately), which include general admission seats and seats at premium level, were committed to the branches for distribution among the constituent clubs of the IRFU.

“It’s hard to know what to do,” said a 10-year ticket holder, who is purchasing more than one ticket and whose outlay is in the tens of thousands of euro.

“You listen to [IRFU CEO] Philip Browne over the weekend and he said they are in very bad shape. But still they are taking money in from everybody and not giving us back any feedback. That was my only issue.

“I’ve spoken to a number of other people who hold the 10-year tickets and we’re happy to support them. I’ve paid the first two payments and I think the third one is expected in June or July. But I get the feeling it’s like a travel agent taking payments on Monday knowing they are going to go bust on Tuesday.”

“It doesn’t actually say in the terms and conditions that if you don’t actually pay the last repayment you lose the first two,” added the ticket holder. “The other thing is if we are not going to go back for full games for one or two years how would they expect to compensate us.

“The third point is even when we do go back its unlikely with safe distancing that they will take 50,000 people. So for the first few games how would they deal with patrons, who have paid for their tickets. I do think it’s interesting if they do sell 50,000 how can they self-distance. So is there any compensation for the lack of one or two years. These were to start in the autumn internationals, as far as I know.”

In another financial blow, Leinster chief executive Mick Dawson has been forced to announce that, due to not knowing how and when rugby can restart, tickets for the coming season have been cancelled.

Supporters who bought single match tickets to any of the Saracens, Munster, Zebre or Cardiff Blues games will be refunded automatically, with Leinster launching an Official Membership offering for current season ticket holders for 2020/21 on Monday, 8th June.

Season Tickets for 2020/21 were due to go on sale to the current 12,800 season ticket holders in late March. But given the sporting and financial uncertainty surrounding the Covid-19 crisis, the renewal window was postponed.

“Cancelling our season ticket offering is an unprecedented step,” explained Dawson, “and one that will have a significant financial impact on our organisation but we feel it is the right decision to make.

“It has been a very difficult time for everyone and nobody knows what the future will look like but, as a business, we have to make decisions now based on the best information available to us.

“Our supporters have been a crucial part of our success over the years. We feel that by securing their right to purchase their seat for 2021/22, that our supporters will take some comfort from the steps we have taken.”