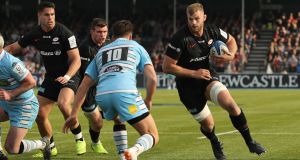 George Kruis will end his 11-year association with Saracens in November and move to Japan, after signing for Panasonic Wild Knights, but the Lions secondrow still hopes to add to his 45 England caps.

With Saracens dropping into the Championship as punishment for repeated breaches of the Premiership’s salary cap regulations, Kruis decided it was the right time to make a move he had been mulling over for two years. By basing himself abroad he will not be able to play for England unless an exceptional circumstance arises.

“This is not an international retirement but a chance to do something that has been itching me for a long while,” said Kruis, whose Saracens contract ends in the summer. “I am only 30 and would like to think there is plenty left in the legs. The contract leaves things open nicely. I am still massively interested in England and Lions honours. I have spoken to Warren Gatland [the Lions head coach] and I would love to be involved in next year’s tour to South Africa. I wanted him to know and I do not see going to Japan as counting myself out. I thoroughly enjoyed it [the Lions tour] last time [in New Zealand in 2017] but time will tell.”

Kruis, who has signed a one-year contract with the option of a second with the Japanese side, is joining a club which had Sam Whitelock, David Pocock and Damian de Allende on its books this season, with the Wales centre Hadleigh Parkes also joining in November along with three of the Japan side who started the World Cup quarter-final against South Africa last year.

“Part of my thinking is that the move could help prolong my career, but I am not expecting anything easy there. They train and play very hard. I always intended to check out Japan if I was in the England squad and I fell in love with a place that was totally different to anywhere I had been before, especially culturally, and I am keen to see that side of it. I want to be a person who has many experiences and a bank of memories.”

Kruis would need to return to England to resume his career with the World Cup finalists and cannot imagine playing for anyone in the Premiership other than Saracens, the club he joined in 2009. “Mark McCall [the club’s director of rugby] was very understanding. I have an unbelievable love for the club and have no interest in going anywhere else in the Premiership. I will take it a year at a time with the World Cup a while away. I have not spoken in depth to Saracens about returning there, but it is my ideal.” - Guardian