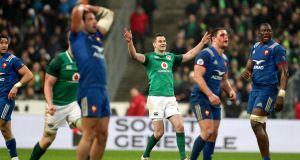 Lockdown has hardened the mindset of Johnny Sexton. If that is even possible. The Ireland captain turns 35 in July so these lost months matter more to his career than most.

“One good thing for me, at the age I am at, is this has given me a bit of a taste of what retirement might be like,” said Sexton at the IRFU Analytica conference. “I definitely, definitely don’t want to retire any time soon.

“I’m reading a book called Play On [The New Science of Elite Performance at Any Age by Jeff Bercovici], which Mick Kearney gave to me, the old Irish team manager who’s back currently, he’s sort of part-time team manager now.

“It’s all about how all the top athletes played on until their late 30s, early 40s and I’m reading it like the Bible at the moment and taking in every bit of it.

“My wife’s trying to throw it in the bin every chance she gets but it’s been a good time from that point of view. Time to start again. Really, that’s the way I’m looking at it.”

The Analytica Zoom conference, to raise funds for Pieta House, also brought Sexton back to what will probably remain the most disappointing moment on a rugby field.

That October night in Tokyo last year will certainly sit beside the other World Cup disappointments of Wellington in 2011 and Cardiff in 2015.

“One thing I always think we never talk about is the spectacular failures,” said Vinny Hammond, the IRFU’s head of analytics and innovation, who was moderating the event . “You prepare and prepare only to look up and it is completely different. Is there any moment in your career where the analysis is done but you look up and just go ‘Oh no?’”

“Lots are coming into my head at the moment in terms of mistakes but they weren’t based off the back of analysis.

“If you go to the New Zealand quarter-final when the team that you have analysed and you think you’ve got the beating of – and you know you had them the last two times you played them [sic] – and in many ways you maybe should have beaten them by more than the last two times.

“Maybe we should have gone and looked at individuals as opposed to teams and realised what we were up against.”

It is set in stone that the All Blacks completely dismantled Ireland when storming to a 22-0 half-time lead. The quarter-final finished 46-14.

“Everyone is a genius in hindsight.”

Sexton will be remembered for the moments of greatness in a glittering career, like his 28 points in the 2011 Heineken Cup final and the 2018 drop goal in Paris.

“If I had known the percentage of drop goals that go over from there, I probably wouldn’t have taken it on, but you get a feel,” Sexton told Hammond.

“We had been going for five minutes. Guys were out on their feet. It’s the end of a long and very physical game. We weren’t going to get a penalty. Lots of things were coming into it.

“It was a case of: had I got one from here before? Yeah. Do I have it in the bag? I think I do. Let’s not die wondering.

“You have to have a shot. If you never had a shot there, I don’t think anyone would have blamed you because I think a lot of people were blaming me as the ball left my foot – Joe Schmidt, you, Andy Farrell, all cursing me!

“Everyone I know pretty much said the same but that is where experience from knowing that you have done it before.

“It’s amazing, I hit a drop goal against Treviso that no one will remember, again one minute to go from the exact same spot. I knew it was there but again, I practised so much every week. Only a few long-range goals but they are something you practise from time to time.”

Andy Farrell will be speaking at part two of the Analytica conference next Thursday.