Jordi Murphy: ‘Not knowing when things are going to be back has been tough’ 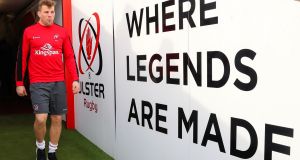 Jordi Murphy, a huge fan of the Netflix documentary series The Last Dance that centres on Michael Jordan, is asked if he could offer a rugby player comparable to the iconic American basketball star.

After a brief pause he settled on former Munster, Ireland and Lions captain, Paul O’Connell, explaining: “I only got to play with him for the last two or three years of his career. He was one of those people who didn’t leave anything to chance; he was always so well prepared, looked after himself incredibly well. He was a pretty incredible competitor.” He did add that O’Connell was much nicer to his team-mates.

Murphy recently signed a two-year contract extension with Ulster having joined from Leinster in the summer of 2018 and conceded that his decision was straightforward when he weighed up the most salient aspects of his life. His partner Laura loves Belfast and he is grateful for the warmth of the welcome and unflinching support received from the Ulster supporters.

In rugby terms he is energised by the talent and ambition around him and while his original decision to travel north wasn’t easy he hasn’t regretted a moment. “In the first place it was tough leaving Leinster but it was definitely the right decision.

“Obviously when I was coming in, there was quite a bit of uncertainty around the squad and coaching tickets but Ulster have done a really good job in signing quality players, bringing people through the academy and the coaching ticket is really strong [with] some young, talented coaches.”

He suggested that if externally people might have been a little surprised with how well Ulster fared in the abridged season, there was a belief vindicated in performances that the group could excel. The addition of players like Ian Madigan and Alby Mathewson reinforced Ulster’s ambition and Murphy is excited by the squad that head coach Dan McFarland has assembled.

The only thing missing now is the rugby itself and while the players are only marginally more informed about when it may resume – they hear the same rumours – the likelihood is that it is not going to be for several months. Training therefore becomes slightly abstract because there are no matches, resembling a giant, never-ending pre-season.

It’s understandably wearing and the continuing uncertainty periodically gets to the players. Murphy admitted: “Not knowing when things are going to be back has been tough. I [have] definitely felt a bit anxious the last while, which is a feeling that I have never really had before and trying to deal with that has been tough.

“I have been chatting away to family and friends and making sure that I get out, getting exercise in, that definitely helps. I have been trying to stick to a routine, make sure that I train three or four days a week. I managed to nick a bit of gear from Ulster before we finished up, got a bike and a couple of weights for the garage and I have some playing fields near me so I have been tipping away in training.”

He hasn’t physically seen his team-mates for nine or 10 weeks, the same is true of his family in Dublin. Murphy’s heard the suggestion that when rugby resumes in Ireland it could be in the form of an interprovincial series initially. At this stage he’d take anything and that includes being permitted to train in small groups of three or four players. It’d take the edge off the isolation.

He’d even welcome a match behind closed doors if nothing else was on the rugby menu, the closest previous experience when playing an All-Ireland League match for Lansdowne against Cork Constitution in front of about 300 supporters on the main pitch in the Aviva stadium.

Murphy would welcome the opportunity to add to the 30 caps he’s won for Ireland, the last of which was the World Cup match against Russia in Japan. He’s spoken to Ireland head coach Andy Farrell. “Andy was very good. He rang me just before the Christmas camp and said that they were going to bring in some new faces and that I had had some good games but maybe not consistently enough.

“He gave me a couple of pointers in things to work on. I went back to the drawing board and tried to work on a few of those and unfortunately during that Christmas period didn’t do enough to get picked in that 35/36 man squad. It’s very disappointing when you don’t get picked in those situations.

“I got with some of the coaches in Ulster and talked about things that I could improve on. That’s all you can do. You have to try and find a way of getting picked.” Or these days, simply playing.

Fixture list will help police decide if Premier League matches should be at neutral venues 13:15
New Zealand could allow ‘sold out’ sports stadiums next week 08:49
Jacob Stockdale on dealing with online abuse; Seán Moran reminisces about what we’re missing 06:52
Red card replacements among new laws in New Zealand 06:17
Seán Moran: Summer’s mosaic slips away one small tile at a time 06:00
Here is your handy guide to sport on television this week