Gregor Townsend thinking outside the box to keep Scotland improving 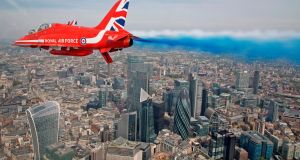 The Scotland rugby head coach and his backroom staff had a video meeting with the RAF’s aerobatic display team - the Red Arrows. Photograph: Getty Images

Gregor Townsend hopes his learning sessions with the Red Arrows can help Scotland make a flying start when they resume international action.

The Scotland rugby head coach and his backroom staff had a video meeting with the RAF’s aerobatic display team three days before the pilots played a key role in the UK’s VE Day celebrations.

Townsend and his team have had regular online sessions with a number of other management and coaching teams in a bid to share ideas and get an extra edge for when sport returns following the peak of the coronavirus pandemic.

“After the first couple of weeks, we had reviewed the entire Six Nations with our coaches and players,” said Townsend, whose team’s summer tour to South Africa and New Zealand has been postponed.

“After we went into lockdown, our analyst said how about we have a takeaway Tuesday, we invite someone in and get to share that learning. I thought it was a great idea. And on a Thursday, if we have had conversations with other people around the world or read a book, we will share that with the rest of the coaches.

“That worked for a couple of weeks but then it became almost every day because we were getting so competitive about phoning up a coach from another team and those people were saying yes. It became excellent, learning from sport or other organisations can get you to open your mind more.

“We have had people from teaching, coaching education, rugby league, rugby union, hockey.

“It’s just got us to think from an outside perspective on what we can do well, what we can build on and things that have worked in other domains that could apply to us. It has been a good time for us to improve as coaches and get some professional development.”

The 47-year-old added: “These discussions and meetings are quite varied. This week we had the Toronto Blue Jays, a hook-up with our staff and their staff. I think there was about 30 people on the zoom call and then we broke out into groups about things around player well-being, communication but also strength and conditioning and scouting.

“We’ve spoken to people in football. We spoke to the Belgian coaches, Roberto Martinez and his staff.

“We’ve also spoken to people in rugby, but probably the most fascinating one was the Red Arrows. We got to speak to two of their team of nine, one of them being their leader.

“It was three days before they flew over London and we just couldn’t believe they gave up their time to discuss how they put together their performances, how they review it. There were a few things we took from that we could apply in our sport.”

Townsend and his fellow coaches will have more time to enhance their knowledge after World Rugby announced all July internationals had been called off.

Scotland had been due to take on South Africa twice before playing the All Blacks away for the first time in 20 years.

Townsend said: “It has been clear to our players, staff and supporters that the significant impact of Covid-19 across the world has meant international travel at this time was going to be very unlikely in the coming months and so it has proved.

“As a team we were generating some positive momentum in the Six Nations and we were all looking forward to the exciting challenge of playing the world champions, and the All Blacks, on their home soil this summer.

“As a tour it would have provided an excellent learning experience, but we fully understand the reasons why it can’t go ahead.

“We wish the players, staff and families of both South Africa and New Zealand well at this difficult time and look forward to testing ourselves against them in the future.”