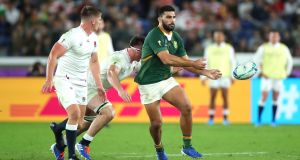 A board meeting of Celtic Rugby, the organisation which runs the Guinness Pro14, is today expected to ratify that new signings from July 1st will be eligible for any finale to the 2019-20 season should there be one.

Although new arrivals were signed with next season in mind, against that players whose contracts have not been renewed or have signed elsewhere will not be available. Thus aside from therefore restricting teams to operate from smaller squads, were players signed from July 1st onwards ruled ineligible for a delayed finale to the current season, there would also be issues regarding restraint of trade.

In any event, with Pro14 internal derbies such as the intepros in Ireland being provisionally pencilled in from the third weekend in August – Friday 21st to Sunday 23rd – the expectation is that newly-signed players will be permitted to take part.

Munster have confirmed that de Allende has already landed and completed his 14-day self-isolation period in Limerick, while Snyman and Gallagher will arrive next month.

Confirming that de Allende and Snyman will officially join Munster from July 1st “regardless of what happens with Covid-19” the Munster head coach Johann van Graan added: “I’m really looking forward to seeing both of them play for Munster.”

“It’s still too early to determine whether Matt Gallagher, RG Snyman and Damian de Allende will be eligible to play in the closing stages of the current Pro14 season if that goes ahead. What I can confirm is that the new season is around the corner and we can’t wait to see them in the red of Munster,” added van Graan.

“Matt Gallagher will be coming to Munster rugby predominantly as a 15,” admitted van Graan “and he will fight hard for that ‘15’ jersey. He’s also very good on the wing and we’ve got multiple options across the back three; so looking forward to some really good competition, not only for the fullback jersey but also for the wings.”

A fifth coach will also be added a ticket which currently includes van Graan, Stephen Larkham, Graham Rowntree and Van Graan said the Munster coaching staff had “spent some quality time together over the last nine weeks looking at our game and planning for the future”.

“As I said at the beginning of the season we are looking to add a fifth coach to our coaching team. As soon as I’ve got any more information available I will give it after this Covid-19 crisis.”

David Kavanagh, head of commercial and marketing, also said that naming rights for Thomond Park, something which has been floated for many years, is “very much on the cards for Munster. We’ve seen how well it works in other sports and in our own sport both here and abroad.”

“Look, it’s very much a part of the modern sports landscape, so getting the right partner on board for Thomond would be great for us. It will help maintain and enhance Thomond and improve the fan experience on match day. So yeah, it’s of significant interest to us and it’s very much underway at the present time.”

This looks like being the final staging post for the strong-running forward from Wexford, whose career started in the Leinster academy and took in Plymouth Albion, Rotherham Titans, Cardiff Blues and Munster before he joined Connacht two seasons ago.

Announcing his move on his twitter feed, Copeland said: “One adventure ends and another begins. Loved my time in Galway with Connacht rugby but sadly my time there has come to an end. Some great memories and fantastic people!”

Wishing Andy Friend and the squad his best for next season, Copeland added, “I hope they go on to do great things”. “For me my next step is a place I have always wanted to play, France. The opportunity to go and explore French rugby and French culture is one I cannot pass up.”

Located in the Nouvelle-Aquitaine region and inland from Bordeaux, Copeland’s new team play their home games in the 8,000 capacity Stade Chanzy in Angoulême, a city with a population of 40,000.

The product of a merger in 2010, they have spent the last four seasons in France’s second flight after three promotions in six seasons, finishing seventh, just four points behind Biarritz and the last of the play-off places when the season was abandoned due to the coronavirus pandemic.