Australia’s NRL set for return to action on May 28th

‘Today is a landmark day for rugby league in 2020,’ said chairman Peter V’Landys 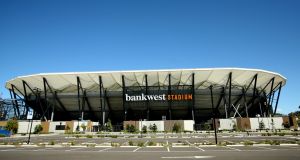 The Bankwest Stadium in Sydney. National Rugby League is set to return on May 28th. Photo: Matt Blyth/Getty Images

Australia’s National Rugby League (NRL), which was interrupted after two rounds due to the Covid-19 pandemic, will resume as a 20-round competition on May 28th, league commission chairman Peter V’Landys said on Tuesday.

V’Landys, head of the independent board that oversees the game, made the announcement after “extensive consultation” with broadcast partners, clubs, and key stakeholders.

The grand final of the most popular winter sport in Australia’s eastern coastal states will be played on October 25th and the competition draw will be determined in the next two weeks.

The two rounds of matches already played will be counted and the competition ladder remains in place when the games resume.

“Today is a landmark day for rugby league in 2020. This is a great outcome for our players, fans, partners and stakeholders,” V’Landys said in a statement, thanking the CEOs of broadcasters Nine and Foxtel for their backing.

“I’m extremely appreciative for the cooperation and support from Hugh Marks and Patrick Delany. Both have always acted in good spirit and have demonstrated how partners work together.”

Training will recommence for clubs on May 4th amid stringent biosecurity measures and V’Landys said it was safer to play now than when they did in the second round of action.

“The daily infection rate in NSW was 25.79 per cent when the last game was played. It has been now less than 1 per cent in NSW for the last 18 days and is continuing to drop,” he added.

“There’s also been a significant improvement in the recovery rate, being 75 per cent in NSW and 83 per cent in Australia. Our players will be safer under our protocols than they would be as regular members of the community.”

Australian states are starting to relax restrictions as the local rate of new infections slows. The country has recorded 84 deaths associated with the virus.

Johnny Murtagh to train for the Aga Khan in Ireland 16:40
Salwa Eid Naser cleared of anti-doping violation by World Athletics 16:38
Longford hand Cork a walkover in final Division 3 match 15:57
Johnny Sexton aware of how Ireland can offer fans an escape 15:34
Jason Holder ‘disappointed’ in Australia and Pakistan for not taking the knee 13:17
Crossword Get access to over 6,000 interactive crosswords