Andrew Conway diary: Switching from blue to red a lifetime ago 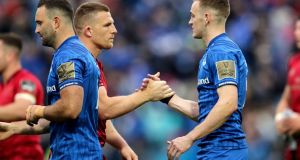 This lockdown has allowed time for reflection like never before. I’ve been living in Limerick for seven years now and it almost seems like a lifetime ago that I played for Leinster.

I had nearly joined Munster straight from Blackrock College. I’d gone to both Heineken Cup finals in 2006 and 2008 to support Munster with my dad and a school friend whose dad was from Cork. My uncle, Mark McDermott, played hooker for Munster, and those ties were reinforced by going to those finals at the age of 14 and 16, and seeing the scenes in O’Connell Street in Limerick which were flashed onto the Millennium Stadium big screen. Those things don’t leave you.

Myself and my dad were shown around the University of Limerick campus before we went to Munster’s last Magners League game of the season against the Ospreys in May 2009 in Thomond Park. We were in the box with all the Munster academy lads. I was 17, they were 19 to 23, and knew I was a Leinster schools player. Not the most comfortable I’ve ever felt.

We were also interviewed by Colin McEntee, the head of the Leinster academy, Richie Murphy and Mick Dawson. My mum was probably the main driver, as she was keen for her impressionable young son to be closer to home.

I made my Leinster debut at 18 in February 2010 against the Scarlets. I got the last six or seven minutes, made a try-saving tackle and set up Jonny Sexton’s try. I played well against Cardiff and was then picked outside Brian O’Driscoll in a strong selection against Connacht in Galway. We were destroyed and I had a stinker. Didn’t know what I was doing. Some of the Connacht lads got stuck into me.

I was promoted to a senior contract that summer, when Joe Schmidt arrived. It was a tough environment for a young player to develop and it took me a while to get past those struggles. Even so, the two Under-20 World Cups went well and I did have a little more game time in the next two seasons, but half-way through the 2012-13 season I decided it was time to move on.

Isa Nacewa had always been very good to me and during the 2012-13 season, sitting on the box jumps in the UCD gym, I told him that I’d decided to move on to Munster. He told me he was retiring, which wasn’t known at the time, and implored me not to move on.

It had been my best season with Leinster and I was still only 21, but I just felt in my gut that joining Munster was the right choice. The perception is that I went to Munster to get more game time, but Munster then had Simon Zebo, Keith Earls, Felix Jones and Doug Howlett, who didn’t retire until after I’d signed. It was arguably tougher to break into the Munster back three, and as a young lad from Dublin I was joining the back of the queue.

My decision didn’t go down well with Joe. I didn’t know it, but at the same time Johnny had decided to move to Racing. That was way bigger news, but I was another Leinster-born player moving on so the timing wasn’t great.

The following March I was due to be on the bench for Leinster A against Munster A in the UL as part of Paul O’Connell’s comeback before the Lions’ tour, and he played 40 minutes. But one of the Leinster lads was sick, so I started at fullback, had a good game and scored a good try.

CJ Stander had just arrived and I remember trying to tackle him. To this day I’ve never felt strength like it. I hit him and just crumbled. I thought: ‘Who is this fella?’

But all the Munster coaches were there and my performance would stand to me when I moved to Munster. I was also restored to the Leinster team and after scoring a hat-trick against the Ospreys my last two games were the Challenge Cup and Pro12 final wins over Stade Francais and Ulster.

I moved to Limerick that summer. Felix was just moving out of a house with Johne Murphy and Ian Keatley, and set me up, but Johne initially wasn’t too keen as we’d be rivals. And I’d skinned him for that try in the A game in the UL.

Johne said I could move in for five or six weeks and Liz drove me to Newlands, where Keats picked me up. A few tears were shed, and for a shy young lad, getting to know Johne and meeting new teammates was difficult.

However, Johne and myself got on like a house on fire, and the same with Kate, now his wife, who was a teacher in Kildare at the time. I lived with Johne and Keats for two years in Foxhollow, and then lived with Killer (Dave Kilcoyne) for a year. We were on separate journeys at the time - I was weird in one way and he was weird/wild in another way. Great times. Top man.

Myself and Liz then bought our house in Castleconnell almost four years ago. I signed a new three-year deal in February, so all going well by the time my next contract talks come around, I’ll have been here 10 years.

1 Next stop the Champs-Elysées in green for Sam Bennett
2 Born to ride, born to win: Sam Bennett, the making of a green machine
3 Let’s face it, Saracens don’t really care that they are rugby’s most hated team
4 Leeds win seven goal thriller as Premier League returns to Elland Road
5 Keith Duggan: Surreal story of John Delaney needs to act as a wake-up call for FAI
Real news has value SUBSCRIBE