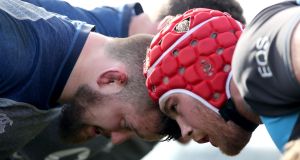 The IRFU’s return date for provincial squads of May 18th is under “constant review” but medical experts believe collective training, before a vaccine is discovered for the coronavirus, increases the risk of players being infected.

“Increased risk of Covid-19 transmission during training is more likely in certain athletic settings where athletes train in groups, engage in contact sports, do not adhere to universal guidelines for social distancing, make use of shared equipment, do not practice universal guidelines to maintain personal hygiene, and use common facilities such as changing rooms,” wrote James Hull, Mike Loosemore and Martin Schwellnus in an article published by The Lancet medical journal.

Prof Schwellnus is the director of Fifa Medical Centre of Excellence in South Africa, Dr Hull is a respiratory physician and Dr Loosemore is lead consultant in sport and exercise medicine at the UK Institute of Sport.

“I think playing behind closed doors, if it does come to that and revenue can be generated from that, and we get back into that rhythm of playing games, I think it would be a positive thing in the situation that we’re in,” said Leinster coach Leo Cullen this week. “We’re certainly open to various different proposals that are out there, but obviously they have to be proposals or ideas that are going to work.”

Leinster, like all sporting organisations in Ireland, is primarily guided by Government advice but they have a direct link to Prof John Ryan, the head of emergency medicine at St Vincent’s hospital, who is the squad’s team doctor.

The Lancet article stated that approximately 20 per cent of all endurance athletes have a “heightened susceptibility to viral respiratory tract infection”.

“Several specific issues are pertinent here, including questions regarding decisions to continue training, potential transmission of disease within teams, the potential effect of vigorous exercise on infection susceptibility, and the need for guidance regarding return to play, following Covid-19 infection.”

This information comes alongside reports of the Six Nations putting a contingency plan in place to play international matches in October, if permitted by the UK, French and Irish governments.

However, Prof Sam McConkey – an expert in infectious disease at Beaumont hospital – has stated any international sporting events, pre-vaccine, can only go ahead safely if there is “zero or close to zero” infections in the local community and visiting athletes spend 14 days in quarantine before entering Ireland.

Ireland’s tour of Australia this summer has yet to be formally cancelled but facing the Wallabies twice in July or the November fixture in Dublin are almost certainly not going to happen.

Rugby Australia’s internal problems have hit a new low as John Eales, their most decorated captain, criticised a letter sent by Nick Farr-Jones and 10 other former captains calling for the executive body to “step aside.”

“I did not sign the letter because I felt it better to act on concerns directly, as a group, with the chairman, as he is already enacting considerable change,” said Eales. “What I know is that there are good people across all levels of rugby working hard to solve complex problems. Paul McLean [Rugby Australia chairman] is at the front of making that change and renewal. Everyone wants what’s best for Australian rugby.”