Stuart Lancaster: ‘We will do what is right for society not for sport’ 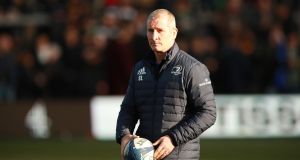 Stuart Lancaster has kept busy through the Covid-19 pandemic, working with Leinster’s players from his home in Leeds. Photograph: David Rogers/Getty Images

Leinster senior coach Stuart Lancaster accepts that team sports such as rugby will invariably take longer to return than individual or non-contact sports.

Furthermore, the one-time PE teacher who is based in Leeds with his family, admits that whenever professional rugby union does return it will almost certainly be behind closed doors, but that ultimately the needs of society come before the needs of sport.

“We just have to follow the lead of the Government as to what is appropriate and what’s not and then to be absolutely rigorous in following the guidelines. It seems to me, it is obvious that you are not just going to flick a switch and start training and playing as you did.

“There is going to have to be a whole load of procedures and protocols put in place to allow you to train in isolation, small groups and then build it from there. We’re not just going to go back training like the last day we had in Energia Park,” said Lancaster in reference to the full squad session he oversaw in Donnybrook two days before Leinster were due to travel to South Africa in the Guinness Pro 14.

“That is sensible. Sport will follow a lot of other organisations and Government procedures and we can follow other teams in the southern hemisphere where they have less cases and where perhaps sport will get back earlier. There is talk of sport in Germany, soccer potentially.

“In the UK and Ireland there will be others from whom we can learn lessons and follow their lead. It wouldn’t be wise to come back to the way we were. It will be a steady approach which will be Government-led and science-led.”

“My understanding in Ireland is that there are restrictions on large gatherings until September anyway. So from our point of view something is better than nothing but, equally, nobody wants to rush that process. We’re all aware of the seriousness of the situation in society. We will do what is right for society not for sport.”

A potential problem for Leinster and the other Irish provinces is that cross-border competitions such as the Pro 14 or the Heineken Champions Cup, all the more so as countries have handled the Covid-19 pandemic differently and are thus easing restrictions to different timescales.

Speaking by video conference to some of the Irish rugby media on Monday, Lancaster neatly sidestepped a question comparing the approaches of the Irish and UK governments – “I don’t think it’s time to apportion blame.”

However he also agreed that in the increasingly unlikely event that rugby can somehow shoehorn all its unfinished parts from the 2019-20 season into a coherent finale of sorts was a minefield – albeit one that offered opportunity for the sport to perhaps achieve a global calendar.

“Minefield is the right analogy, with international rugby alongside domestic rugby and every stakeholder within that: French league, English league, Pro 14, Europe. There’s no doubt it is going to be very tricky to navigate a way through this and satisfy all stakeholders.

“There will have to be compromise from everyone. I understand the international and the club opinion. Whatever pathway they take the players have to be at the centre of any decisions they make. The danger is that everyone tries to put everything into a very small window or into a window that extends for a whole 12-month period.

“There has to be common sense applied as well. The only way we will solve everything is by everyone giving a bit of ground in order to move the game forward. It is also a personal chance to recalibrate what the global game looks like and this is probably the best chance to do it.”

In addition to monitoring his players from afar, it comes as no surprise that Lancaster has been keeping very busy in an effort to upskill himself.

Lancaster also revealed he had given both attack and defence sessions to around 60 to 80 AIL club coaches as well as conducting a coaching call with 1,000 GAA coaches.

“It’s made me go back and reflect on all these principles I learned as a teacher and try to relate them to Gaelic football, for example. There’s a lot of games I wanted to watch and I’ve been lucky to get the wide view of the World Cup, particularly the knockout games. That’s been big for me, having a look at the players.

“I’ve wanted to analyse them and then feed them back to the playing group at the right time, explaining why things happened: England beating New Zealand and then losing to South Africa, etc.”

He also oversaw a WhatsApp message to the Leinster squad on what they have achieved so far in a hitherto unbeaten season, the areas which have gone well and can be improved, and both what they can achieve in this enforced break and in the future.

“We have got a very young team and we’ve obviously got a blend of youth an experience so it’s just trying to keep that fire ignited in them. Hopefully this will end and we want to come back in a better shape than when we left it.

“Since then we have been sending stuff through to the players more as units, forwards and backs, just to keep the grey matter ticking over and they are obviously doing their training when and how they can.”

Lancaster says he has been sensing nothing but a positive vibe throughout the squad.

“I’m sat in Leeds and the only impression I get when I communicate with them is a group rolling their sleeves up and getting on with it. Everyone is very aware of the bigger picture and looking after everyone in the community.”