The Offload: James Cronin case not the first time we’ve heard of prednisolone 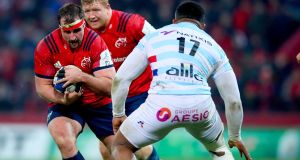 To paraphrase Hunter Thompson ‘We had just finished the warm-up when the prednisolone began to take hold.’

Where had we heard about this synthetic steroid before the James Cronin case? Did we, very carefully, write about it a few years ago? Something about 81 nanogrammes per millilitre in the system of a player when the world anti-doping agency limit is 30.

There is only a handful of doping cases in rugby. A French club final at the Nou Camp rings a bell, and Bernard Laporte – the wily FFR president – exonerating the accused before an independent hearing reached the same conclusion.

Couldn’t have been the highest points scorer international rugby has ever known?

Dan Carter put his trust in Racing 92 doctor Sylvain Blanchard. Just like Cronin blindly handed over the emailed prescription for the antibiotic amoxicillin from Munster doctor Jamie Kearns only to swallow nine performance enhancing tablets, as per the dosage on the label, in the 12 hours leading up to Racing’s visit to Limerick last November.

Turns out Carter’s injection dampened swelling around his troublesome knee. Case closed. Turns out another James Cronin had been prescribed prednisolone and not the Munster prop who had to swallow “some fault,” according to the independent judicial officer Antony Davies, for not wondering aloud why the pharmacy handed over two medications instead of one. Also, Davies added, “a simple Google search” would have revealed the sweets in his pocket were on the banned list.

Case close unless Wada, Sport Ireland or World Rugby dip their toe into an expensive appeal process before May 11th.

That makes it three doping stories to visit Munster since 1998. As Cronin will learn from Tom Tierney’s positive test and the furore around Gerbrandt Grobler, details of his pharmacy faux pas will rear its head with each new case.

Agustín Pichot’s bid to unseat Bill Beaumont as chairman of World Rugby is expected to end in failure. The secret ballot should allow the 68-year-old Englishman to see off the 45-year-old Argentinean with about five of the 51 votes to spare.

Unless, that is, new additions to the World Rugby Council – 16 women joined last year – decide to revolt against their male elders.

For example, the IRFU have three votes with Su Carty expected to row in behind Phil Orr and John O’Driscoll as Irish rugby remains loyal to the northern hemisphere bloc.

“I am starting 20 votes against 14,” Pichot admitted as the election neared.

The 20 votes being a united Europe (imagine that) against the southern hemisphere big three and South Americans.

We know Fiji have Sir Bill’s back. He is expected to survive the Francis Kean scandal mainly because his temporary partner, Bernard Laporte, who exposed the political naivety of South Africa and Ireland when capturing the 2023 World Cup for France, knows precisely how to secure the vote of wavering council members.

The answer, Pichot knows, is power. And those in control have no intention of handing it over. So, unless there’s a major surprise, rugby union will remain the “old boys club” the Argentine valiantly attempted to infiltrate.

I’ll stick to the chicken cacciatore, thank you

Watching Irish rugby’s “performance chef” Maurice McGeehan skin and debone a chicken on social media, with a backdrop that could be the foothills of the Andes, reminded us of our favourite ever rugby interview.

Many years ago we encountered Uruguayan doctor Roberto Canessa. In 1972 when the plane carrying Old Christians RFC crashed into a glacier somewhere along the Chile-Argentina border, Canessa, then a teenage medical student, was forced to carve up his dead team-mates to feed the survivors (after 10 days of rationing chocolate).

Several books and two films – both called “Alive” – tell the harrowing but ultimately heroic story of how Canessa and his best friend Nando Parrado breached the longest exposed mountain range on the planet after a 10-day trek.

“Some of the people say, ‘Oh, you are the ones who were saved because you used the dead bodies of your friends,’” the cardiologist replied to my anthropophagy question. “As if we took their dead bodies and we were out of the mountain. No, we were in the same place. We only bought some time.”

Some man. Anyway, Roberto popped into my disturbed mind as chef McGeegan made a delicious cacciatore. Unmissable content in these rugbyless times. Hopefully they turn it into a series.

“I’m not a social media person, but I’m aware of some of the things that were said over a period of time in a quite vicious and vitriolic way. It’s the silent forces, the dark forces, they’re the things that upset me most. She shared some of that with me, which I found quite abhorrent. One of my greatest concerns with her was her welfare and how she was on a daily basis. A lesser person would have thrown the towel in ages ago, quite simply.” – Rugby Australia chairman Paul McLean condemns the bullying of Raelene Castle who resigned as CEO last week.