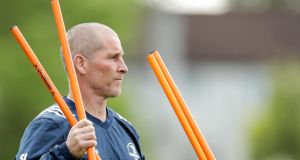 The old maxim goes that you learn more from your defeats than your wins, in which case Leinster would have little to learn from this extended period of contemplation.

When the 2019-20 season was suspended they had won all of their 19 competitive matches, albeit much of their motivation came from the bitterness of their last defeat in the Heineken Champions Cup final against Saracens last May, 22 games ago.

Yet their senior coach Stuart Lancaster believes that whenever rugby does return, Leinster can do so in even better shape.

“I just think we should be able to grow our knowledge of the game, grow our learning. When someone described to me leadership, the development of leadership, it’s that you go up in a steep upward curve and you’re flat out, you’re going day in, day out, and you’re not stopping to pause. Then you go through this plateau period and you go again. I think we’re in that plateau period now.

“If I know the Leinster players as well as I do, every one of them will be sat there thinking: ‘Right, how can I get better? How can I help the team get better? What are the areas that we can improve on as a team?’ And part of what I’m trying to do with the other coaches is to get feedback from them about where can we go to next. Where’s the game going to? How can we be ahead of the curve so to speak?

Back home with his family in Leeds, Lancaster himself has been busy, giving attack and defence seminars for around 60 to 80 AIL club coaches, conducting a coaching call for up to 1,000 GAA coaches and re-watching games, with particular emphasis on the World Cup knockout phase.

A prevailing view is that this extended break could hasten the end to the careers of icons such as Roger Federer or Tom Brady, although Lancaster reckons it could actually have the reverse effect for players in their 30s, and specifically Johnny Sexton.

Noting how unusual this extended break is, Lancaster added: “For those players who are coming towards the end of their careers, over 30s, if they manage themselves in this period it could actually be of benefit but the trick is, obviously, the self-discipline to manage yourself.

“You’re not coming in to work where everything is prescribed for you. But there are so many good role models at Leinster and so many players who are of a mind to be like that, it would be surprising to me if there was anyone who wasn’t trying to improve in this window.”

While admitting that shoehorning all the unfinished parts of the 2019-20 season into any kind of meaningful finale was akin to “a minefield”, Lancaster saw this time as an opportunity to achieve a global calendar. That would also make a World Club Cup every four years more plausible, a concept he would welcome.

“It would be brilliant to actually do that, to actually create some form of competition, albeit whether it’s the winners of each league or the top four or whatever.

“I wonder whether TV and the drive for growing the game would want that. I think they would, personally. I don’t know how you’d do it. Obviously, I’m not privy to all that sort of stuff but a chance for Leinster to play the Crusaders for example. Who wouldn’t want to watch a game like that? So, it would get my vote.”

As for next season, 2020-21 concludes with a Lions tour to South Africa, and Lancaster’s Test match experience and increasingly impressive CV with Leinster would have to put him on Warren Gatland’s shortlist.

“It is a long way off, isn’t it? It just feels like so far away, you just sit there thinking, ‘Oh, the Lions’,” said Lancaster in seemingly gathering his thoughts, before admitting:

“I think everyone as a coach would ultimately want to test themselves at the highest level but I’ve never personally chatted to anyone about it.

“So we’ll see, there’s been fantastic coaching teams that have gone in the past. I’m sure they would all be keen to put their hands up again in the future.

“But let’s hope we’re in a position, probably this time next year, where we’re really actively debating who is going on that tour and it’s going to be a fantastic tour, and everything that we hoped for will happen.

“But equally who is to know how long this is going to go on, it’s just so hard to look too far ahead. My mind is very much focused on do what’s right for today to help society get through tomorrow.”

As a former PE teacher, Lancaster is a passionate proponent of physical exercise for all, and that certainly applies during this time.

“My wife, interestingly, does online boot camps and fitness classes, and more and more people are signing up. She’s got a team from Ireland, signed up last Saturday, a Gaelic football team. It’s a virtual class obviously, but I think for everyone I see a lot more people taking walks and hopefully that will be part of a new healthy lifestyle for us when we come back.”