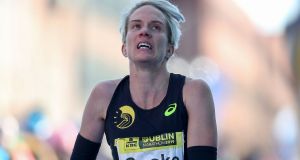 The treadmill in the spare room is currently serving as a clotheshorse and the intention is to keep it that way. Of all the changes Aoife Cooke is making to her training to stay within the 2km radius of her home, running on that treadmill will be the last of them. Things are bad enough.

It’s grand if you’re tipping away for the local parkrun, for whenever they resume; it’s different if you’re training towards the Olympic marathon, and the Tokyo qualification races whenever they resume. For Cooke, every distance within that 2km radius isn’t very far, but as long as it’s outdoors it’s far enough. Especially in headspace.

Her home is in Tower, close to Blarney, about 12km west of Cork city, and before the latest Covid-19 restrictions Cooke’s long runs would often take her more than 30km in one go – or more than 100 miles in a week, in old money. She’s cut back on that slightly, given the recent confirmation that Tokyo 2020 is now set for similar dates in 2021, but there are still miles to run and promises to keep. Even within 2km.

“For sure, still training every day,” she says. “It’s not quite marathon volume, in that I don’t need to do the 20-mile runs every Sunday morning, but it’s a similar routine, with two or three sessions a week. You have to be very mindful of keeping the fitness up, so when the races come around again, you are ready, aren’t playing catch up.

“And yes, all within the 2km radius. Runners are no different from anyone else on that front. Living in Tower, not too far from Blarney, so it’s a bit out of the city, but also quite hilly, which does make it that little bit tougher again.

“You don’t want to be running hills on your easy runs. But I’ve a few options. There’s a nice loop, within the 2km radius, which adds up to about four miles, so two or three loops of that is a good run. There is also one relatively straight road, which I can run out and back, if I’m doing a faster running session, or intervals. That’s all good for the moment.”

Like all other Tokyo hopefuls, Cooke found her best-laid plans for 2020 slowly and then suddenly put on hold. After her stunning breakthrough in the Dublin Marathon last October, winning the national title in 2:32.34, the fastest marathon ever run by an Irish woman on home soil, also jumping her from 55th to fifth on the all-time Irish women’s marathon list, Cooke was set to run the Vienna marathon, on April 19th.

Over Christmas, she spent six weeks in the high altitudes of Kenya in preparation, only to find Vienna, like most other spring marathons, postponed due to the coronavirus pandemic. For a while, her entire Tokyo dream was in limbo, before the IOC eventually agreed to hit the reset button for the summer of 2021.

“Training was actually going very well,” she says, “everything was on track for Vienna, and I was just looking forward to seeing how much faster I could run. Because Vienna was one of the first marathons to be postponed, just the unknown part was quite frustrating.

“It does suit me, in some ways. For a while it looked like I might not be able to run another qualifying race, but I will be able to do that now, hopefully, later on this year, or next year. Trying to qualify in 2020 was maybe a bit of a rush, pushing things a bit, But regardless of all that, postponing was the right decision. It made no sense to have a huge international event like the Olympics this year.”

At age 33, Cooke is still perfectly young by women’s marathon running standards, the extra year can also help her add to her race experience.

She won her first national medal as a junior, the standout achievement being her third place finish in the Irish Junior Cross Country in 2005, but she later drifted away from the sport, before making her return six years ago, spurred on again by the pure enjoyment of running.

That’s what is getting her through these days as well. The Covid-19 pandemic has impacted on her business too, as a personal fitness trainer, working at the gym facility at the Apple plant in Cork.

“All gyms have closed at this stage. And the one-to-one training is impossible too. I still have some online clients for running coaching (see aoifecookefitness on Facebook), and I’ve just started live online classes using Zoom, a five-week class, maybe up to nine or 10 at a time. So it’s tipping away, just about enough to keep me going. I think people want some sort of ‘live’ connection, feeling as if they’re part of a group anyway.

“I think this whole situation has given most people a better perspective on things, what’s important. I just hope once all this is over people keep that kind of mentality. And just being able to get out in the fresh air is important, which is why running is so important now.”

And also why the treadmill is being left alone: “It’s probably the last resort, if it comes down to it. At the moment I still want to get out. But obviously if there are any more restrictions that will be the way to go. But I think I’ve only used that treadmill maybe twice ever, and that was in the bad snow a few years ago.

“I’m also getting to know the neighbourhood, there are actually some nice areas. I used drive a bit more to the running loops, without realising quite what’s on my doorstep. I’d do most of my easy runs alone anyway, so that’s no different, but for the session I’d have got together with a few lads from the Eagle club, so you miss that.

“But the motivation for Tokyo is definitely still there. I’m even more willing to get out and log the miles, keep the head in the right place. Hopefully, if things improve, I might look at racing Dublin again, in October. The joy will be enormous. We won’t take it any of it for granted again.”