Australian rugby staring into abyss as another crisis hits 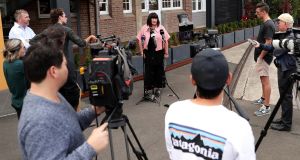 More than 100 staff cleared their desks at Rugby Australia’s shiny offices near Sydney Cricket Ground on Tuesday and Wednesday in a troubling portent of an uncertain future for the game in the wake of the coronavirus shutdown.

Already cash-strapped after five years of only modest success on the field and ructions off it, the suspension of all professional sport to help contain the pandemic has come as a perfect storm for rugby union’s governing body in Australia.

While other unions around the world have been forced to cut costs, and USA Rugby are making the tactical move of filing for chapter 11 bankruptcy, few face a future as bleak.

Twice world champions and World Cup finalists as recently as 2015, the Wallabies are undoubtedly one of the powers of the international game.

In response to the crisis, Rugby Australia Chief Executive Raelene Castle agreed to a 50 per cent pay cut before announcing on Tuesday that 75 per cent of RA staff would be laid off for three months with those remaining working shorter hours on reduced wages.

RA’s 2019 accounts have yet to be signed off because of the uncertainty but Castle said in announcing the layoffs that they faced a “worst case scenario” of A$120 million (€66 million)losses in revenue, a devastating amount for a body of its size.

Former Wallaby Rod Kafer, now a television pundit, said on Wednesday the roots of the crisis predated the coronavirus pandemic and called for wholesale changes at the top.

“This concept for the rugby community that ‘everything’s okay, just trust us’ when the CEO says we’re staring down a A$120 million hole? How did the board allow the game to get into that position?” he told Fox Sports TV.

“We know rugby was sick a long time before the coronavirus came along. Rugby’s been sick for years, people have been calling for change and it hasn’t occurred. And yet, the same people who’ve taken us off the cliff are still in charge.”

This year was already going to be tough financially for RA due to the usual reductions of revenue following a World Cup year being compounded by the financial fallout from the lengthy battle over Israel Folau’s sacking last May.

The decision to spurn the offer of an extended broadcast deal from long-term partners Fox Sports and take the rights to market has also left them potentially exposed when the current four-year, $285 million contract expires at the end of 2020.

The next job for Castle and her team is to start negotiations over what are now inevitable player salary cuts with the Rugby Union Player’s Association (RUPA) and their chief executive, Justin Harrison.

Former Wallabies lock Harrison says Rugby Australia were being nowhere near as transparent as they should be about the extent of the crisis facing the game.

“Australia’s professional rugby union players are still waiting on detailed financial information from Rugby Australia after talks in Sydney today, still not provided after three weeks of requests,” he said in a statement on Tuesday.

“Although RA provided no assurances, RUPA looks forward to the opportunity to assess that information in the near future.”

“Taking the game to the point of insolvency is what this management team and board have done,” he added.

“It is time for drastic change, the rugby community ... has watched this train smash over the last few years and has called for change. Now’s the time to demand it.”