‘NRL Island’ being considered in Australia to continue season

Rugby League players, coaches and staff would be housed in luxury resort near Brisbane 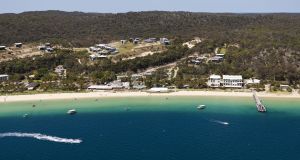 The resort is on Moreton Island near Brisbane. Photo: Reinhard Dirscherl\ullstein bild via Getty Images

It may sound like a desperate pitch for a bad reality TV show, but the National Rugby League (NRL) season may yet be saved after an audacious plan was outlined to house all 16 teams at a luxury island resort near Brisbane, with a view to playing the entire competition in Queensland.

David James, the manager of the Tangalooma Island Resort, told League Life on Fox Sports on Wednesday night that the complex on Moreton Island could fit up to 1,500 guests – more than enough for the estimated 500 or so players and staff.

The sprawling grounds, including a grassy airstrip, would be adapted to accommodate training sessions under the proposal, while players would be ferried to the mainland on private boats and then on buses to and from locked-down stadiums on match days.

The ambitious plan, which would be subject to strict safety measures in light of the latest government advice on reducing the spread of the coronavirus, has been handed to the NRL, according to James, and the ball is “now in their court”.

“The greatest thing is we can isolate the place,” James said. “We can lock it down. We started talking about it a few weeks ago and we put together a plan logistically about how we can isolate players into the resort itself.

“We’re off the coast of Brisbane and we want to go through a process with the NRL and the Queensland government – and the NSW government for that matter – whereby we’re testing players before they come into an isolated, clean, Covid-free environment.

“From there, we do the training and then we can ship them back into and out of Brisbane to the Gold Coast and to Redcliffe to play their games and then back into the isolated area.

“We’ve got a fleet of high-speed ferries and catamarans ... bus charters would be organised from our wharf in the mouth of the Brisbane River that would take people straight into the stadiums.”

All those involved in the plan, from coaches and players to hotel staff and bus drivers, would be subject to coronavirus testing before arriving at the resort. James said the general unavailability of testing equipment would not be an issue.

“We’ve actually been in contact with one of the companies in Brisbane that are saying they are going to produce 500,000 15-minute Covid-19 tests by this Friday that the government will have access to,” he said.

The resort has housed rugby league, union and cricket teams in the past, along with Roger Federer when he featured at the Brisbane International tennis tournament five years ago, and James said he was confident that the existing facilities, as well as some modified features, could comfortably cope with the demands of a sizeable cohort of NRL players and staff.

“We’ve got some great features – the waterways, the sand dunes,” he said. “Then we’ve got a 900-metre-long, 60-metre-wide grass airstrip that we can repurpose for training fields and we’ve a lot of lawn areas and grass areas around the resort – probably another four areas along with the beach.

Increasingly desperate to play some form of the season after play was suspended due to the Covid-19 pandemic – plunging the game into an unprecedented financial crisis – the NRL is exploring its options within the changing framework of government and health officials’ advice.

“[There’s an] opportunity worldwide for getting the great game of rugby league out there in the American markets and advertising Queensland and Australia and saying, ‘Look, we’re a country that thinks differently,’” James said.

Return of golf’s world rankings ‘a bit unfair’ - Joost Luiten 11:22
Rugby union looking at success of rugby league as a summer sport 10:21
Clubs play practice matches ahead of Premier League return 09:40
Conor McGregor announces his latest UFC retirement on Twitter 09:25
‘The same, but different’ - Irish racing ready for resumption 09:00
Here is your handy guide to sport on television this week