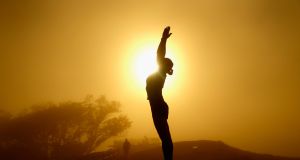 Joanne O’Riordan: ‘I’m not saying yoga is absolutely for everyone. But in two of my greatest times of need, it has definitely gotten me out of a hole.’ Photograph: Phil Walter/Getty Images

I don’t know when it was exactly that I went mad courtesy of self-isolation. Was it when I found myself arguing with those I live with about where to store bread (some say fridge, I say you’re wrong)? Was it when I started talking to my dog through an at home camera that dispenses treats when I swipe up? Or was it when I began moving straws, forks and dessert spoons around my mouth without using my teeth and hands?

I have been doing yoga with the Himalayan Yoga Valley in Cork for just under a year now. Initially, my six-week goal was to go on my head without any aid and balance for 30 seconds. Dream big and all that.

The pool provided solace and silence in a way that most exercises couldn’t. And the best part was I could do it completely independently

For context, I am the only member of my family who can swim unaided and unattended in a pool. There are seven in total in my family and God forbid any of them were to fall into water – I would be the only person capable of bringing them out. It’s not exactly comforting knowing the girl with no limbs is the only one that could save you.

But alas, I perfected all of my strokes, and the butterfly became my favourite. Not only did it give me a killer body and great back muscles, but it also became a weird escape from everything in my life. The pool provided solace and silence in a way that most exercises couldn’t. And the best part was I could do it completely independently. Sure, I needed someone to bring me to the changing rooms, but I could stand on the side, hop in and swim away until my heart was content.

Then, a back operation to fix my scoliosis put a temporary halt to my athletic career. Ellen Keane was officially safe in becoming one of Ireland’s greatest Paralympian since I was now in recovery for the foreseeable future.

Then I got sedentary and lazy. What was the point in exerting or straining myself when I could rupture a titanium rod that essentially held me together, ensuring I didn’t collapse in a jelly-like heap? Imagine having your brain paralysed with fear that one move and the titanium rod might become a pendulum swinging in my back, knocking off the spinal cord, discs and everything else that keeps you going. It’s a bit weird, as was explaining my new sixth sense that I got – basically, if someone is coming up behind me, I tell everyone my rod tingles, alerting my spidey senses. Disclaimer: there is no medical proof.

About a year ago, I missed my summer bod and my six-pack. I actually lost the ability to sit on my own completely unaided and looking good doing so. Sitting on a surface, unaided made my face go red and out of breath in an instant.

And then I was introduced to yoga.

When I heard yoga, I had a particular image of what and who did it. Tall, lean, lanky people who effortlessly throw a leg behind their ear while balancing on their thumb as well as writing Instagram captions like “Keep your face to the sun, and you will never see the shadows” – whatever that means.

I met my first instructor Lalit, my yogi, explaining to him within six weeks I wanted a bikini bod. I even wore a Victoria’s Secret t-shirt that said “sweat like an angel”. Initially, we went through the basics of breathing, general core stretches and making the stagnant muscles around my back move again. We repeated these almost every day, be it at home or in the studio. I won’t bore you with the details of how I’m a master, but I can sit unaided on every surface and now bend myself from side to side, forwards and backwards, something that was impossible for about seven years.

In this general time of uncertainty and chaos, the instability that has been thrust into our lives, my one constant is the 20 minutes of stretching and breathing every day. Preserving some sense of normality is really important for people’s wellbeing, and promoting good health, both physical and mental is crucial. Ensuring that you have a routine can also break up the days.

I’m not saying yoga is absolutely for everyone. But in two of my greatest times of need, it has definitely gotten me out of a hole. Sure, I still sometimes feel sad while isolating and anxious when thinking about loved ones.

Self-isolation has taught me two things. One, I’m the biggest pain in the ass I have ever met in my whole life; and two, although I’m at my most annoyed when I lose control, laying on a mat, moving my head, shoulders and core around while inhaling and exhaling has calmed me down.

Mindfulness can help those who already feel they have lost their mind.