British racing gets back in stride after equine flu scare 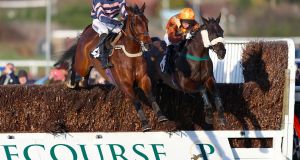 For the first time in a week, there was the sound of hooves thudding against turf on a British racecourse on Wednesday. Not as many hooves as normal, perhaps, since an unknown number of jumping horses have not had a booster jab against equine flu in the last six months, a strict requirement for every runner as the sport emerges its self-imposed quarantine after flu outbreaks in Newmarket and Cheshire. But it was still competition, and a much-needed chance to earn a wage after a six-day suspension.

Many of racing’s employees are earning only when the action starts. Most jockeys are paid by the ride and their valets are self-employed too, while if there are no horses to bet on, the on-course bookies have no punters to service.

“I’ve been sat at home watching South African racing,” said John Goss, laying bets on the Sherlock Racing pitch in the betting ring before the first of six races here. “It’s a day’s wages, every day you’re off. You’ve no idea what that will be, but I’ve missed about five days even though it’s a quiet time of year.

“I’d want to be out at least 250 days a year. There would have been mortgage-payment worries if it had gone on much longer.”

At Musselburgh on Tuesday evening, Andrew Hughes was forced to turn his horsebox around and set off on the long journey back to his base in Co Kilkenny after his six-year-old The Tartan Spartan failed to meet the British Horseracing Authority’s new biosecurity requirements.

No horses were turned away from Plumpton on Wednesday, but one was ruled out overnight because its last flu booster jab was more than six months ago and in all, just 46 runners faced the starter on the six-race card.

Like many National Hunt trainers, Anthony Honeyball had been forced to rummage through the passports of his entire 50-horse string to determine which were still eligible to run, after the BHA announced its new rule on Monday night.

“I think it [the BHA’s handling of the flu outbreak] was good, it was all right,” Honeyball said, after saddling Acey Milan to win the first race on the card.

“The only thing for me was that at 11 o’clock at night I was qualified for anything I wanted to run in and then at 11.30, half the horses can’t run. I can’t even offer a better way though, there’s plenty of clever people looking at it and that’s their job, and my job is train the horses.

“We don’t tend to do a mid-winter booster now, but we’re probably going to be forced to do it now, which is a pain in the backside to be honest. We’d like to go September and May, so it’s eight months and four, but you’ve got to be six months now and it’s going to be like that for a good while.”

Alan King, whose Good Man Pat was the second winner of the day, has a full yard to run as he routinely gives his string flu boosters in January, although “believe it or not, this is the first year when I nearly didn’t do them, because they were in pretty good form and it can knock them back”.

Aidan Coleman, Acey Milan’s rider, was one of a group of around half a dozen leading jump jockeys, also including Sam Twiston-Davies, Kielan Woods and Tom Cannon, who made a swift dash for the ski slopes of Chamonix when the six-day suspension of racing was announced last Thursday.

Others, though, were more circumspect as they were forced to take an unexpected break from one of sport’s most injury-prone occupations.

“I’ve not been doing a great deal, in fairness,” James Best said after a surprise win on the 22-1 chance Micquus in a handicap chase. “I haven’t skied in my life before. I thought, if I go and try that, I’ll definitely break an ankle.” – Guardian