Presenting Percy lined up for ‘last chance saloon’ at Gowran 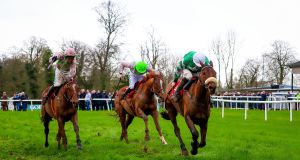 Presenting Percy is set to line up at Gowran this Saturday, and the Cheltenham Gold Cup favourite doesn’t look like scaring off some strong opposition.

On the back of a uniquely dry winter, there instead appears to be something of a “last chance saloon” atmosphere developing about Gowran’s Red Mills Chase in terms of earning a Cheltenham ticket.

Willie Mullins has nominated the Grade Two contest as an opportunity for Al Boum Photo to earn a Gold Cup ticket and hasn’t ruled out his two-mile star Footpad from an appearance either.

The Red Mills could yet see the 2017 Gold Cup hero Sizing John make his long-awaited return to action, while Monalee appears likely to line up.

His trainer Henry de Bromhead said on Sunday: “I didn’t run Monalee the last day [Irish Gold Cup] on the ground and I think he needs the run. We will certainly consider it [The Red Mills].”

Last year’s Gold Cup third Anibale Fly is another star performer whose appearances have been restricted this season due to unseasonably quick dry conditions, and Gowran is also on his radar.

“It looks like the Red Mills is our only option now. He’s in good form and we have done plenty with him since his run at Cork [in December], but I’d like to get another run into him to sharpen him up,” said Anibale Fly’s trainer Tony Martin.

“It’s been frustrating, having to take him out a few times because of the ground, and the race in Gowran could be very competitive. But that’s where we are at the moment,” he added.

His win in the Galmoy Hurdle saw Presenting Percy cut to 3-1 favourite for the Gold Cup. However, the horse hasn’t run over fences since landing last season’s RSA at Cheltenham. Presenting Percy was runner-up to the ill-fated Our Duke in last year’s Red Mills.

In other news, Sunday’s Punchestown winner Josies Orders was cut to 11-2 with some firms for Cheltenham’s Cross-Country Chase.

After the 11-year-old held Hurricane Darwin in a banks race, trainer Enda Bolger said: “He stays well and sees it out and we’ll try and keep him in one piece now for March. They weren’t bad horses, it was a good test and the timing is just right.”