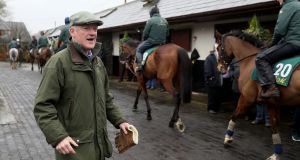 Trainer Willie Mullins during a visit to his yard in Closutton on Wednesday: he is readying a battalion of up to 60 horses for Cheltenham. Photograph: Brian Lawless/PA Wire

Willie Mullins’ old lieutenant Ruby Walsh isn’t on the front line with him anymore but with 20 days to Cheltenham D-Day, it otherwise feels very like “as you were” for the man in command of the festival’s strongest team.

Once again a battalion of up to 60 horses are being readied by Mullins to invade the Cotswolds where he has saddled a record 65 winners.

They include the reigning Gold Cup champion Al Boum Photo, who finally broke a run of six runner-up finishes for Mullins in steeplechasing’s “Blue Riband”, and Chacun Pour Soi who will try to fill in the final notable gap on his festival CV in the Queen Mother Champion Chase.

Ensuring all turn up present and correct is a logistical headache in itself, never mind factoring in the dread of any injury so close to the main event all but ensuring having to miss out, as evidenced by the 2018 Gold Cup hero Native River being scratched from the big race on Wednesday.

There’s a risk of beating the martial metaphor to death but the unique set of abilities needed to operate at the top of the training ranks, moving all the various moving parts in sync with each other, can often seem more like a task for a military general than a sports manager.

Whether it’s as buyer, employer, mentor, strategist, talent-spotter, coach, confidant, critic, salesman, spokesman or psychologist, the buck invariably stops at the top where, when it comes to training racehorses, a gift for diplomacy can be a particularly valuable skill.

That’s because a downside of scale is juggling a lot of options which inevitably involves keeping different owners happy.

The fact Mullins has revolutionised jump racing over the last decade in particular is evidence enough of his inner-Eisenhower, just as his notorious split with Michael O’Leary indicates how even the smoothest diplomat can fail to keep every ball in the air every time.

Nevertheless, manoeuvring horses around the 28 races up for grabs at Cheltenham must sometimes seem easy compared to navigating the various desires of their nervous owners.

For instance the wonderful veteran Un De Sceaux is in the mix for a sixth successive Cheltenham trip next month with entries in both the Champion Chase and the Ryanair Chase which he won in 2017.

“Connections are very keen to go for the Champion Chase with him,” Mullins said on Wednesday at a traditional pre-festival media event. “We’ll go with the flow.”

Veterans of such occasions noted the tactful shrug and translated it as mild bemusement at wanting to line up in one of the hottest Champion Chase renewals for years where Chacun Pour Soi is the big stable hope against both the defending champ, Altior, and Defi Du Seuil.

Mullins joked that Chacun Pour Soi’s colourful American owner, Rich Ricci, had heard about the Cheltenham shindig and sent him a “do remember we have not spoken about plans yet” text about his other stars, Benie Des Dieux and Faugheen.

Sure enough the trainer acknowledged that “Benie”, a mare he has already declared to be maybe better than any other he has trained, has a Stayers Hurdle option while leaving little doubt the Mares event on Day One is his preferred option.

Mullins describes himself “a creature of habit” when it comes to Cheltenham but one difference this year will be Paul Townend’s position as the stable’s number one jockey.

The synchronicity of how Townend finally won a Gold Cup for Mullins on Al Boum Photo, the horse he had notoriously caused to run off the course at Punchestown a year previously, added another layer of emotion to last year’s feature.

It also eased his passage into the hottest seat in racing after Walsh’s retirement last Spring. Not that the Mullins team viewed it as any kind of seismic change.

“It wasn’t like he [Townend] was coming from another yard or another environment. Ruby was injured so much and Paul has been here so long. He was champion the year Ruby was out [2011] and so was used to riding all the top ones.

“We didn’t think of it as a transition. We thought it’s the same as Ruby was injured and Paul steps in. The only difference is Paul might have felt a bit more pressure himself,” Mullins said.

“We’re very happy the way things are going. He has a great strike rate. He’s been riding fantastic. I just say to him keep injury clear: stay right for the big meetings,” he added.

The loyalty Al Boum Photo’s owner, Joe Donnelly, showed Townend after his infamous blunder ultimately got rewarded with the biggest prize of all and the horse is favourite to become a rare double Gold Cup winner.

“I would assume Paul is going to ride him again. He’s won over the rack and everything. If I was Paul I’d find it very hard to get off him,” Mullins said.

Donnelly is also in a fortunate position of having two of the season’s top novice hurdlers racing in his silks.

Shishkin is trained by Mullins’ great cross-channel rival Nicky Henderson and is favourite for the festival’s opening race, the Supreme Novices Hurdle.

That would seem to logically leave Asterion Forlonge free to run in another race - except that Mullins wants to go to the Supreme too.

“My connections did come to me about Asterion Forlonge and said ‘Willie, do what you want to!” Mullins relayed.

It might be the best kind of communiqué any general can hear.

1 Sonia O’Sullivan: Taming The Tan gave us one last roll of the dice before shutdown
2 Final record attempts before lockdown; underage rugby feeling the effects
3 America at Large: On Long Island, longing for a return to our field of dreams
4 Ireland’s underage rugby stars miss out on chances to shine at Easter
5 Leona Maguire knows staying put was the right choice as rookie season halted
Real news has value SUBSCRIBE

Eddie Jones set to sign contract extension with England 07:43
Final record attempts before lockdown; underage rugby feeling the effects 06:59
Premier League stress to PFA that players need to take pay cuts 07:37
Reality Bites – Tales from the new normal: Shane O’Donnell 06:30
Sonia O’Sullivan: Taming The Tan gave us one last roll of the dice before shutdown 06:15
Here is your handy guide to sport on television this week