'Tiger is very, very special to us. We’ll look after him first and foremost' - Eddie O’Leary 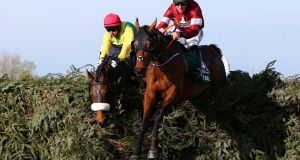 The ‘will he-won’t he’ saga about Tiger Roll bidding for a historic Randox Health Aintree Grand National hat-trick looks set to continue after the Michael O’Leary-owned star had his big-race weight compressed by just 1lb on Tuesday.

The eagerly-anticipated announcement of the National weights revealed the British Horseracing Authority (BHA) handicapper has dropped Tiger Roll by a single pound from his official rating of 171.

That makes him equal topweight with his stable companion, and another O’Leary-owned runner, Delta Work, who is also dropped 1lb from his mark.

It puts the ball firmly back into the court of the Ryanair boss’s Gigginstown Stud team who have repeatedly insisted they would not run Tiger Roll in the National on April 4th if his rating wasn’t significantly dropped for the race.

That included shortly after Tiger Roll became the first horse since Red Rum to win the world’s most famous steeplechase back to back when O’Leary’s brother Eddie said last April: “We’re rated 171 – if he’s off 165 he’ll run but if he’s off 166 he won’t be running.”

To give him 1lb, okay it’s disappointing but the handicapper has his job to do and so be it

More recently O’Leary said both he and his brother have had an acceptable figure in their heads but wouldn’t reveal it.

However even though there was disappointment in the Tiger Roll camp at his treatment by the BHA handicapper, Martin Greenwood, a shot at a unique National hat-trick still hasn’t been ruled out by them.

“To give him 1lb, okay it’s disappointing but the handicapper has his job to do and so be it,” Eddie O’Leary said on Tuesday.

Asked by Sky Sports Racing if Tiger Roll would take his chance in the National, O’Leary added: “I’m not sure. One thing for certain is for certain he’ll be entered in the Betfair Bowl as well.

“Tiger is very, very special to us. We’ll look after him first and foremost and hopefully he comes through Navan on Sunday [Ladbrokes Boyne Hurdle] and goes on to Cheltenham and hopefully that all goes okay. If he’s okay after Cheltenham then we’ll make a choice.”

He described the chances of Tiger Roll attempting three in a row as “50-50.”

The National is the one race of the year where the handicapper can deviate from official ratings in allotting weights. Greenwood said on Tuesday that doing the National weights this year was relatively straightforward.

“I have made Tiger Roll and Delta Work joint topweights. This decision was made essentially on two factors – historical compression which was brought in by Phil Smith (former BHA handicapper) and has been used for the last 10 years or so.

“On the other hand I have to give Tiger Roll this mark based on his efforts over the National fences at Aintree where he is of course unbeaten,” he said.

The reality for Tiger Roll fans however is that the hugely popular 10-year-old is weighted to give 4lbs to the 2018 Cheltenham Gold Cup hero Native River.

Bookmakers immediately pounced on that and some cut Native River to 10-1 second favourite for the National even though his owner has suggested he is unlikely to go to Aintree.

Tiger Roll maintains his position at the top of betting lists as a general 5-1 favourite.

The Irish star’s trainer Gordon Elliott appeared more sanguine about the handicapper’s decision and said: “A blind man would know he’s going to carry 11.10. We were obviously hoping for a pound or two less but Martin [Greenwood] and his team have a job to do.

“We’re 4lbs worse off with Magic Of Light who was second in the race last year so it’s probably fair play – I’ll not be giving out. Everyone has got their own opinion. If it’s left to me he’ll run.”

Red Rum is the only horse ever to win the Aintree National three times but he completed his hat-trick in 1977 after two other runner-up finishes. No horse has ever won three in a row.

Despite his credentials as the most famous National runner since Red Rum, Tiger Roll still has to qualify to run in this year’s race since he hasn’t run in a steeplechase this season.

A third win in a row in next month’s cross country event at Cheltenham would tick that box but the immediate focus now will be on Navan this Sunday where Tiger Roll is due to return to action in the Grade Two Boyne Hurdle.

He landed the race last year as a 25-1 outsider and is one of 14 entries left in at Tuesday’s forfeit stage.

Another horse holding a Boyne Hurdle entry is Darasso although JP McManus’s runner also has a pair of options at Gowran the day before.

A defence of his Grade Three Red Mills Trial Hurdle is one although that might be overlooked in favour of a return to fences in the Grade Two Red Mills Chase.

Darasso is one of a dozen entries left in the €60,000 event which also includes the progressive Troytown winner Chris’s Dream.