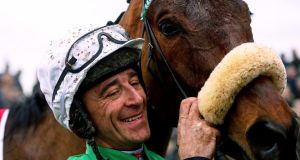 Owner Philip Reynolds is hopeful Presenting Percy will improve on his return to Cheltenham under Davy Russell. Photograph: Tommy Dickson/Inpho

Owner Philip Reynolds is keeping his fingers crossed a return to the Cotswolds will bring out the best in Presenting Percy, after confirming his pride and joy firmly on course for the Magners Cheltenham Gold Cup.

Such was the impression the nine-year-old made when doubling his Festival tally in the 2018 RSA Chase, Pat Kelly’s charge was favourite for the blue riband last season off the back of a solitary run over hurdles.

Presenting Percy could finish only eighth on that occasion and has been beaten in each of his three starts this season, most recently finishing third behind Delta Work and Kemboy in a thrilling Paddy Power Irish Gold Cup at Leopardstown earlier this month.

Generally available at double-figure odds ahead of his latest visit to Prestbury Park, Presenting Percy might not carry the same expectations as 12 months ago — but Reynolds nevertheless remains optimistic.

He said: “I don’t really feel any differently now to how I did straight after the Irish Gold Cup, to be honest. It is what it is. He was beaten four and three-quarter lengths by two horses that also beat him in the Savills Chase at Christmas.

“We have to hope that once he arrives in Cheltenham and breathes in that Cotswolds air that he remembers where he is and can find that bit of improvement that he needs to find.

“We know he likes Cheltenham. He came back with an injury from the Gold Cup last year, so you can put a line through that run and other than that he’s unbeaten there — and I think the extra two furlongs will help him.”

Presenting Percy is a best-priced 12-1 for the Gold Cup. The betting is headed by last year’s winner Al Boum Photo and Santini at 4-1, shortly followed by the likes of Delta Work, Kemboy, Lostintranslation, Clan Des Obeaux and Native River.

Assessing the field as a whole, Reynolds continued: “Percy is twice the price of the horse that has beaten him the last twice (Delta Work), so the pressure is on them now rather than us, which maybe isn’t a bad place to be.

“I think you could make a case for the first even or eight in the betting — and while you can find fault in Percy, you can probably find fault in them all, to be fair.

“I think Percy did improve from the Savills Chase to the Irish Gold Cup, but so did Delta Work and Kemboy.

“We’ll have to see if we can improve past them at Cheltenham or not. I know it’s at the back of Pat’s mind that it’s all about one day, so I certainly hope there is improvement there.

There have been some suggestions Presenting Percy should be rerouted to the Stayers’ Hurdle, but Reynolds responded in no uncertain terms when asked if that was a serious possibility.

Davy Russell has steered Presenting Percy to eight of his 10 career wins, including his two Cheltenham Festival triumphs.

Following the injury suffered by Jack Kennedy in the race that followed the Irish Gold Cup, the ride on Delta Work at Cheltenham is seemingly up for grabs — and Russell has previously won three Grade Ones on Gordon Elliott’s charge.

Whether he is offered the ride on Delta Work remains to be seen, but Reynolds is hoping he will be on board Presenting Percy.

He added: “I’m sure if it is put to Davy (offered the ride on Delta Work), it will be a difficult decision. If you look at the antepost lists for Cheltenham, there are a lot of horses wearing the maroon and white silks (of Gigginstown House Stud) towards the top.

“I’ve spoken to Davy since the Irish Gold Cup and there was no suggestion there would be a change of riding arrangements. I don’t expect there to be a change, but I’m not the one who would ultimately make the decision.

“In my opinion, Davy is the best jump jockey there is around the chase course at Cheltenham and he knows that I wouldn’t swap him for anyone else. I’ll be keeping my fingers and legs crossed for Davy as much as I will for Percy.

“We have a very good relationship and if he was going to switch, I’m sure he wouldn’t leave it until the last minute to let us know.”