Tiger Roll on track for Aintree after solid run in Navan

“He came to win two out and just got tired,” reported jockey Keith Donoghue afterwards 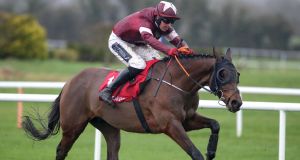 Navan saw Tiger Roll come forth on Sunday and while he came fifth in the feature race it was still just the job for racing’s most popular horse.

Rarely if ever has a winner been so overlooked as Tiger Roll’s stable companion Cracking Smart was after the Ladbrokes Boyne Hurdle.

He even got accompanied to the winners’ enclosure by the little horse who made a hugely encouraging first appearance since emulating the legendary Red Rum with back-to-back wins in the Aintree Grand National last year.

Tiger Roll moved superbly through most the Grade Two race and appeared to be travelling best of all turning into the straight with a repeat of his surprise success in 2019 briefly looking on the cards.

Not surprisingly the minor operation that interrupted his training at the end of 2019 took its toll in terms of fitness in the closing stages and jockey Keith Donoghue nursed him home.

It was a performance as smooth as last week’s atmosphere about whether or not he would target an unprecedented National hat-trick in April was turbulent.

“He came to win two out and just got tired,” reported the jockey while Elliott confirmed another tilt at Cheltenham’s Cross-Country will precede potential racing history at Liverpool in April.

“I thought he ran a brilliant race. He jumped and travelled everywhere. Down to the second last he had a blow. We kind of knew that was going to happen.

“I was very worried about the ground (heavy). I didn’t think he’d walk on it and I was worried about his fitness. I thought it was a positive run,” Elliott said.

Most bookmakers left Tiger Roll unchanged as favourite for both a fifth Cheltenham festival victory and three in a row at Aintree on April 4th.

Next up for the little star of racing’s biggest story will be a pre-festival trip to Cheltenham to get his eye back in over the cross-country course.

“We’ve done it the last three or four years. We’re not afraid to travel,” Elliott added.

It wasn’t such an encouraging race for last year’s National runner-up Magic Of Light who faded badly in the straight and the 3-1 shot finished last of the eight starters.

Elliott and Davy Russell doubled up in a mares handicap hurdle with Sassy Yet Classy.

However Elliott’s red-hot 1-4 bumper favourite Ballyadam wound up finishing only third behind Patrick Mullins’s mount Julies Stowaway with the pair split by Delvino.

“I said to his owner at the start of the year I’d love to finish in the Irish National,” said Captain Cj’s trainer Dermot McLoughlin.

Clare trainer Brian McMahon bought a new yard around Christmas time and only discovered afterwards that it’s just over the border in Co Galway. However the move is proving lucky and he saddled a first double on Sunday.

The 14-year-old veteran Seskinane rolled back the years by winning a handicap hurdle at 14-1 while topweight Se Mo Laoch earned a spot in Cheltenham’s Kim Muir with a gutsy handicap chase victory.

“Two or three winners a year would be the height of it usually so two in a day is beyond belief,” said McMahon who has just eight horse in training. He joked about the location of his newly purchased premises. “If I’d known I’d have thrown it back!”

Willie Mullins had another odds-on maiden hurdle winner with Francin too strong for Elliott’s The Very Man.

On Saturday the champion trainer uncovered a late contender for this year’s Champion Hurdle as Cilaos Emery justified 1-4 odds at Gowran on his return to flights. The former Grade One winning hurdler had fallen at the first on his previous run over fences.

“I think the plan is to supplement him. It is Luke McMahon’s [owner] plan. We keep coming back to saying he has as much of a chance in an open Champion Hurdle as he has in the Champion Chase,” Mullins said at Navan.

“It’s slightly up and considering the weather conditions I’m very happy with it,” he said.