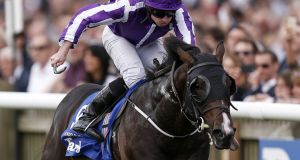 US Navy Flag: on course to take on Australia’s top sprinters in their own backyard in the early hours of Saturday morning. Photograph: Alan Crowhurst/Getty Images

A quarter of a century after Vintage Crop changed the face of Australian racing with a momentous Melbourne Cup victory, US Navy Flag is set to try and break new ground at the other end of the distance spectrum.

Aidan O’Brien’s July Cup winner will be the first international competitor to line up in the world’s most valuable turf race – the $13 million ‘Everest’ – at the Randwick track in Sydney this Saturday.

It is the second renewal of a six furlong contest financed by the purchase of individual $600,000 slots to get into the race.

Coolmore Stud’s plans to run Caravaggio in the race last year had to be abandoned but US Navy Flag is on course to take on Australia’s top sprinters in their own backyard in the early hours of Saturday morning.

The three year old will be O’Brien’s first ever runner in Sydney. The Ballydoyle trainer has made the frame twice in the Melbourne Cup and landed Australia’s top weight for age race, The Cox Plate, with Adelaide in 2015.

O’Brien is likely to have a strong team going to Newmarket this week for Group One options in Friday’s Best365 Fillies Mile and Saturday’s Darley Dewhurst Stakes. But reports indicate Ryan Moore will make the trip ‘Down Under’ for the hugely lucrative climax to Randwick’s ‘Spring Carnival’.

US Navy Flag has been based at the Canterbury quarantine centre and is a 10-1 shot in many ante-post betting lists. Should he win at the weekend it could open up Australian sprinting in a similar way to how middle distance and staying races were targeted after Vintage Crops landmark success in 1993.

“I have no doubt, because in many ways it already has, internationally, this could change how The Everest is viewed,” O’Brien’s representative, Andrew Murphy, told media in Sydney.

“Once you get here you realise there’s plenty of other races you could run in and I’m certain there are other horses that could come as well.

Three in a row

“No sooner had US Navy Flag won the July Cup and Aidan said ‘we’re going to The Everest.’ So he was looked after specifically for this race. And to get the horse over here, you don’t bring horses out here that are going to run well. So I definitely think this is something that could take off,” he added.

That popular veteran could try to get off the mark for 2018 at Newmarket this Friday in the Challenge Stakes although that day’s feature is the Fillies Mile in which O’Brien is likely to try and secure a record-equalling sixth win in the race.

Lasts week’s Park Stakes winner Hermosa and the Rockfel heroine Just Wonderful are among his options.

O’Brien isn’t short of options either for the following day’s Dewhurst which he won last year with no less than US Navy Flag. That completed three in a row for Ireland’s champion trainer in Europe’s most prestigious two year old prize. It was a sixth win overall for O’Brien.

He has eight of the dozen acceptors left in after Monday’s forfeit stage in what is shaping up as a potentially vintage Dewhurst renewal.

Too Darn Hot is likely to start a hot favourite to maintain his unbeaten record while Michael Stoute could try for a first Dewhurst success in 22 years with the highly-regarded Sangarius.

O’Brien has already indicated his National Stakes runner Anthony Van Dyck is likely to run. But he also left in Ten Sovereigns despite appearing not too keen to run the exciting colt again this year after his narrow Middle Park victory. US Navy Flag pulled off the Middle Park – Dewhurst double in 2017.

Willie Mullins looks to dominate the top of the betting for Saturday’s Cesarewitch at Newmarket with Stratum, Low Sun and Limini among his options for the marathon handicap.

Stratum is favourite in ante-post betting and is one of seven Mullins horses overall remaining in the Cesarewtich which this year is worth half a million pounds.

The Ballydoyle team have left in the St Leger third Southern France and Tony Martin – the last Irish trainer to win the race with Leg Spinner in 2007 – is double handed with Golden Spear and Newcross.

Mullins’s focus on Tuesday will be on Galway where he is set to have eight runners including three in the opening maiden hurdle. The summer festival winner Diamond Hill can prove best in that but her stable companion Minella Beau might have to give best to Rashaan in the featured novice chase.

Both were also winners here during the summer and Davy Russell’s Grade Three-winning ride on Rashaan was one of the festival highlights.

The chestnut’s regular rider Sean Flanagan was committed to ride for his boss Noel Meade on that occasion but is back on board now as he makes his return from a fractured leg sustained at Tramore in August.

For a horse able to win at three miles over hurdles, the step up in trip should be ideal for Rashaan. The form of his course win has been boosted significantly by Ornua last week and the popular Colin Kidd-trained winner can record a 13th career victory.