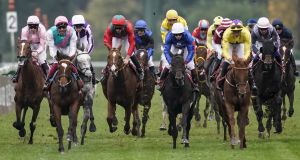 Enable could have a unique Qatar Prix de l’Arc de Triomphe hat-trick in her sights in 2019 after Frankie Dettori’s mount secured a dramatic victory in Europe’s greatest race on Sunday.

Enable just held on from the fast finishing Sea Of Class at Paris-Longchamp to become the eighth horse to win the Arc twice.

The legendary French filly Treve famously failed to make it three in a row in 2015 but Enable’s trainer John Gosden suggested an attempt at scaling that ultimate challenge is already in his thoughts.

“If she’s in good form there’s no reason you wouldn’t try to come again,” said the Englishman who was winning the Arc for a third time.

It was a sixth win in the €5 million highlight for the ebullient Dettori while the much more reserved Saudi owner Prince Khalid Abdullah also saw his colours carried to a record-equalling sixth Arc.

Initial bookmaker reaction was to make Enable a 6-1 chance to carve out a unique racing niche for herself in 2019. In the shorter term she is also 4-6 to land next month’s Breeders Cup Turf in Kentucky.

However she is already assured singular status having become the first British trained horse to win French racing’s €5 million highlight more than once.

Vincent O’Brien’s Alleged managed the same feat 40 years ago off an interrupted campaign although Enable’s singularity extends to winning off just a single run prior to lining up at Longchamp.

That came at Kempton last month and Gosden indicated a nightmarish time since then.

“It’s been very difficult (preparation.) I actually had a hiccup between Kempton and here with a slight temperature so it has not been easy. Her blood wasn’t 100 per cent and she missed a piece of work.

“She wasn’t at her best today. I’ve had a very difficult year with her and started with a bit more hair than I have now. It’s entirely down to the filly and her guts and a lovely ride from Frankie. She’s a wonderful filly and it’s an enormous sense of relief,” he said.

Asked about the Breeders Cup at Churchill Downs, Gosden added: “Give it ten days – what she has done today off this preparation has been extraordinary. It’s been a nightmare getting her here and I promise you she was 85 per cent. But Prince Khalid was here and I had to run.”

Despite operating short of her best the evens favourite still proved a short neck too good for Sea Of Class who just failed to overhaul her rival in the closing stages.

While Dettori plotted a perfect route from an ideal draw, James Doyle was forced from the start to sit in at the back after breaking from a wide box. Turning into the straight Sea Of Class had most of the field still ahead of her yet still carved a path through that only just came up short.

It was a frustrating afternoon for Ireland’s champion trainer who had runners in all six Group One races on the Arc programme.

Broome was beaten a neck by Godolphin’s Royal Marine in the Prix Jean Luc Lagadere for two-year-olds and Ballydoyle’s Dubai based rivals also emerged best in the Prix de l’Opera as Wild Illusion proved too strong for Magic Wand.

Sea Of Class’s trainer William Haggas did secure some Group One consolation as One Master later landed the Prix de la Foret.