Enable once again shows her class at Prix de l’Arc 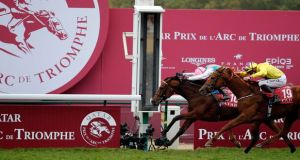 In front of Paris-Longchamp’s new €140 million grandstand the 10-11 favourite emerged best in a finish for the Arc ages, holding off the younger filly Sea Of Class by a rapidly diminishing short-neck.

She became the first British-trained horse to win the Arc back-to-back and Enable could return to Paris in 2019 to try and complete a hat-trick that proved even beyond the mighty Treve in 2015.

A sign of the scale of that challenge are 6-1 odds about a filly superb enough to overcame a tortuous preparation and still win the Arc while rated only “85 per cent” right.

Enable’s trainer John Gosden was at pains afterwards to stress how difficult a run-in it had been and how special a talent she is. So if there really is more in the locker, history might yet be made in the 98th Arc renewal next year.

Whether that will make her the absolute supreme Arc champion is by definition impossible to quantify. Even such a hat-trick won’t dilute the impression that better horses than Enable haven’t been able to win the Arc once.

Nijinsky in 1970 remains the classic example of a great horse who failed to maintain his peak through the season to Paris on the first Sunday in October.

And winning just the one doesn’t mean other legends such as Sea Bird and Sea The Stars wouldn’t leave Enable in their wake if some ultimate fantasy championship could be run off.

But even should numerical singularity ultimately prove beyond her, Enable is already assured legendary status on the Arc’s roll of honour.

Her 2017 success was at Chantilly and exuded all the swagger of a three year old filly at the peak of her powers. A year later, and back at Longchamp, Enable had to dig deep and show all the grit that is as integral to a champion as class.

That it was a three year old called Sea of Class who put her to the pin her collar only seemed to underline the point.

Any pre-race suspicions the younger filly’s name might reflect a towering talent able to camouflage a lack of resolution were blown out of the water.

Unlike Enable’s ideal draw in stall six, her rival was boxed wide in 15 of the 19 runners leaving jockey James Doyle with little option but to drop in.

Doyle’s efforts to pare his tall frame down to 8.9 were a focus of attention on the run up to the race but the effort involved clearly hadn’t frazzled his nerve.

Sea Of Class had only one behind in the false straight and most of the field still in front of her straightening up.

Enable in contrast had a straightforward run just off the pace and looked set for another clear-cut success when Frankie Dettori pushed the button two furlongs out.

Even by then Doyle had to still to secure the clear and cold-eyed passage he eventually got. Despite so much against her, Sea Of Class delivered a challenge that briefly looked like succeeding and which contained unmistakable determination. But Enable had just enough to hold on.

“She did everything I asked and just cruised through. In another three strides we would have won,” Doyle reported to trainer William Haggas who added: “I was thrilled with the ride she got – we were just unfortunate we needed another five metres.”

That there was almost as much post-race focus on runner-up as the winner testified to a special head-to-head between two English fillies who were three quarters of a length ahead of last year’s runner-up Cloth Of Stars back in third place.

Capri did best of Aidan O’Brien’s five runners in fifth while Kew Garden ran on from the rear of the field to finish seventh.

The prospect of head-to-head clashes between Enable and Sea Of Class through the 2019 season is already enthralling and if Sea Of Class was unlucky then Enable’s feat has to be put in the context of her less than ideal preparation.

If Gosden played his cards tight to his chest before the race his unease with how Enable’s prep had gone was clear afterwards, appearing to suggest her owner was instrumental in her lining up.

“It’s great for Prince Khalid. He wanted to come here and if she’s in good form there’s no reason you wouldn’t try to come again,” he said.

“It’s been a nightmare getting her here and I promise you she was 85 per cent. But Prince Khalid was here and I had to run. Forget about Frankie and me; it’s about the filly and the owner-breeder today. Without them this game is dead,” Gosden added.

Forgetting about Dettori is a near impossible job ordinarily and a sixth win on his 30th Arc ride meant there was no chance.

However the Italian admitted to being more nervous than ever beforehand and said: “What a genius John Gosden is, to win an Arc with that interrupted preparation. In the last fifty 50 we were on our hands and knees. I was trying to squeeze everything we could out of her and we got there.”