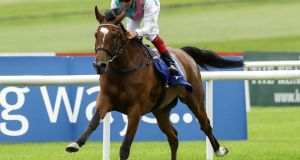 Franke Dettori and Enable are favourites to repeat last year’s l’Arc victory, this time back at a rebuilt Longchamp. Photograph: Lorraine O’Sullivan/Inpho

Even considering the commercial stud imperatives involved, and how legendary names such as Nijinsky even failed to win it once, it’s notable how only seven horses in all – and just four since World War II – have managed to twice win the Arc.

It indicates the scale of the challenge of France’s most coveted prize. Despite that, the Arc’s record-breaking trainer Andre Fabre reflects a rare consensus when he points out how so much of Sunday’s big race will revolve around Enable.

The renowned trainer is in pursuit of an eighth victory in the €5 million highlight which returns to its rebuilt Longchamp home after two years at Chantilly.

Waldgeist leads Fabre’s trio of proven Group One stars but the Frenchman turned to football to quantify their challenge.

“It’s like playing Barcelona, taking on Enable. Barcelona do get beaten. But it’s like combining them with Manchester City, having to take on Enable, Prince Khalid, John Gosden and the Messi – Frankie Dettori, ” said Fabre.

Last year’s Dettori secured a record fifth Arc for a jockey as Enable routed her opposition. If she wins again her owner, Prince Khalid, will join the Frenchman Marcel Boussac on a record six Arc victories. It will be a third for Gosden.

It’s a fearsome combination and with a perfect low draw in six, plus the likelihood of suitable ground, it’s hard to make a confident argument against the hot favourite emulating Treve and Alleged as a double winner.

A lingering fear of the ‘bounce’ factor following her impressive return to action from injury last month might encourage Enable’s opposition although probably not enough to shake a widespread belief that this Arc could be a single horse’s to lose.

However no team goes into the prestigious Arc programme in better form than Ballydoyle. O’Brien has runners in all six Group One races on Sunday. And no one will forget what can happen when he attacks the Arc in strength after 2016’s unprecedented 1-2-3.

Found’s win added to Dylan Thomas in 2007, two of just seven Irish-trained Arc winners ever. The first, Ballymoss, 60 years ago, had won the English Leger the season before. Capri tries to do the same under O’Brien’s son Donnacha. But it is this year’s Leger hero, Kew Gardens, that looks the stable No.1.

Ryan Moore’s mount won the Grand Prix de Paris over the course and distance in July. That was just before virus problems struck that resulted in a rare two-month Group One drought for O’Brien which only ended with that Leger win.

Ballydoyle’s runners have hardly stopped winning since and four more Group Ones have followed since Doncaster.

Prior to Paris, Saturday afternoon sees an O’Brien trio tackle the Sun Chariot Stakes as the trainer seeks a hat-trick in Newmarket’s feature.

Victory for Clemmie or one of her stable companions will generate even more momentum going into an Arc which might require the favourite to misfire but which otherwise looks open.

Kew Gardens hasn’t been helped by being in stall 14 with statistics painting a bleak picture for horses drawn in double-digit figures. What might help though is that he is drawn between Waldgeist and another major fancy in Sea Of Class.

The latter could complete a fairytale family success since her sire, Sea The Stars, won the Arc in 2009 and her grandmother, Urban Sea, won it 25 years ago.

A more practical element to the Sea Of Class story will the struggle her 5ft 9in jockey James Doyle faces to get down to do 8.9. Empathy alone will ensure Doyle has plenty of neutral support come 3.05 Irish-time on Sunday afternoon.

However when it comes to Arc jockeys, Frankie Dettori is unrivalled generally. And in this particular Arc Enable could be too.