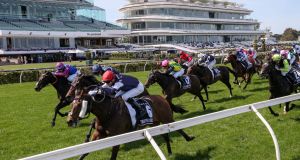 Twilight Payment ridden by Jye McNeil (No 6) on the way to victory in the Melbourne Cup at the Flemington Racecourse. Photograph: George Salpigtidis/Racing Photos/AFP via Getty Images

Another remarkable family success for Joseph O’Brien in Tuesday’s Melbourne Cup was marred by fatal injuries sustained in the race by his father Aidan’s 2019 Epsom Derby hero, Anthony Van Dyck.

The first Derby winner ever to race in Australia fractured a fetlock early in the finishing straight at Flemington, was immediately pulled up by jockey Hugh Bowman, but had to be put down.

It was a sad fate for a top-class racehorse, winner of six of his 19 career starts, and guaranteed a place in racing history through his memorable Epsom victory in June of last year.

As Bowman desperately pulled up Anthony Van Dyck, his stable companion Tiger Moth failed by half a length to overhaul the 25-1 winner Twilight Payment, who had made most of the running under local jockey Jye McNeill to claim the €2.7 million first prize.

It was an uncannily similar outcome to the 2017 Cup when O’Brien Jnr also got the better of his father after Rekindling beat Johannes Vermeer although this time it took place in an eerie behind closed doors atmosphere due to coronavirus.

Inevitably much of the post-race focus was on the ill-fated Anthony Van Dyck and the grisly run of fatal accidents that has shrouded Australia’s most famous race in recent years.

The Irish star was the seventh horse to have died in the last eight renewals of the race. If disaster is never far away when thoroughbreds race at top speed it is still a freakishly disproportionate toll for a two-mile flat race.

The sad list includes Aidan O’Brien’s Cliffs Of Moher who fractured a shoulder in the race in 2018.

If other fatalities didn’t occur in the actual contest–- in 2014 Araldo was spooked after running and injured himself while Admire Rakti collapsed in his stall – then the Melbourne Cup has still got itself a regrettable reputation for serious injuries.

Why that should be the case is unclear. There is no obvious common denominator.

The French runner Verema broke her leg in 2013, and the veteran Red Cadeaux did the same two years later. However, he had finished runner-up three times previously. Twilight Payment is also the sixth European-based winner in the last decade.

After Cliffs Of Moher’s demise, the racing authorities in Victoria purchased a CT scanner for the Werribee facility where overseas raiders are stabled. Every one of Tuesday’s runners was independently checked by vets last week. One horse was withdrawn on the morning of the race when it wasn’t sound.

Critics were quick to refer to a ‘Groundhog Day’ element to what happened to Anthony Van Dyck. For an industry in Australia already under pressure due to welfare concerns it’s greatest shop-window is also becoming a PR nightmare.

A fatality report on Anthony Van Dyck will be prepared by Racing Victoria Integrity Services and is likely to take a number of weeks.

“The fatality report gives consideration to the circumstances of the incident and any potential learnings to assist in the prevention of similar injuries in the future,” a spokesman for Racing Victoria said.

Anthony Van Dyck won over €2.5 million in prizemoney during a career that also took in victories in the Curragh Futurity as a two-year-old, the Lingfield Derby Trial, and September’s Prix Foy in Paris. In his previous start, the son of Galileo had finished runner-up in the Caulfield Cup. He was likely to have begun a career at stud in 2021 had he not been injured.

It all cast a pall over what was another notable date for Ireland in one of Australian sport’s most iconic events.

At 27, Joseph O’Brien emulated Dermot Weld by winning the Cup for a second time. Weld opened up the race internationally by winning with Vintage Crop in 1993. He won with another Michael Smurfit-owned runner, Media Puzzle, nine years later.

Like Rekindling, Twilight Payment is owned by Australian, Lloyd Williams.

O’Brien watched the race from his home in Piltown and saw McNeill deliver a perfect front-running ride in what was the third fastest run Cup in the last 40 years.

“The proof that he got the fractions spot on is watching the race when you see Tiger Moth finish,” said O’Brien. “But the horse is incredible and I’m just thankful of the support and the work everyone has done with the horse, at home as well.”

Bred and formerly trained by Jim Bolger, Twilight Payment was only 11th in the race in 2019.

“This was our first full year with him, he came to us halfway through last year. Going through the summer, he ran a couple of huge races at the Curragh. I was worried today he might have got a bit of pressure on the lead, but the horse has an incredible heart and Jye gave him a fantastic ride,” O’Brien said.

As for beating his father again, he added: “I’d be delighted for him if he had won, and I’m sure he is for me having won. We do our best on the track and whatever happens out there happens.”

Tiger Moth’s jockey Kerrin McEvoy said: “The winner kept running, I just had to pick up to get into the race, which he did, but the winner was just a bit strong today.

“It was a great run for a young horse having only his fifth start in a race. He’s run really well.”

Irish-trained winners of the Melbourne Cup