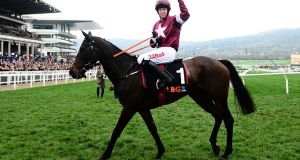 Ryanair boss Michael O’Leary is selling one of his most famous racehorses, Apple’s Jade.

The hugely popular 11-time Grade 1 winning mare will go through the ring at the Goffs December National Hunt sale which takes place on December 9-10th in Kill.

Apple’s Jade won 15 races in all including the 2017 Mares Hurdle at Cheltenham and the Irish Champion Hurdle last year. She also won the Hatton’s Grace Hurdle three times in a row.

She was retired from racing after running out of the money in the Stayers Hurdle at Cheltenham in March.

O’Leary’s brother, and Gigginstown Stud spokesman, Eddie O’Leary, said on Friday: “Apple’s Jade is a very special mare. She was the first mare ever to win 11 Grade 1 races, a feat now matched only by the great Enable, and we hope that she can mirror what she achieved on the track through her broodmare career.

“Gigginstown has never been about having a National Hunt breeding programme which is why she will be offered for sale at Goffs in December. Apple’s Jade could be the ultimate blue hen for any serious National Hunt operation”.

Apple’s Jade was initially trained in Ireland by Willie Mullins for whom she was a spectacular top-flight winner at Aintree in 2016. However later that year she was one of up to 60 horses dramatically removed from the champion trainer’s care by O’Leary following a dispute over training fees.

In other news another of Irish racing’s most prominent business people, property developer, Luke Comer, is targeting in strength a race he sponsors in Germany on Sunday.

He sponsors the Group 2 Comer Group International Oleander-Rennen at the Hoppegarten track near Berlin. Last year he both trained and owned the winner of the race, Raa Atoll.

This weekend Comer will saddle five of the 11 declared runners for the two mile contest including the recent Irish Cesarewitch runner up, Aircraft Carrier.

Another of the Comer quintet is He Knows No Fear who made history in August by becoming the longest priced winner in history. Comer’s horse won in Leopardstown at 300-1.