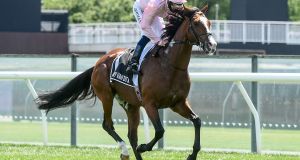 Tragedy again struck the Melbourne Cup after one of the pre-race favourites, Anthony Van Dyck, was euthanised after breaking down entering the home straight at Flemington Racecourse.

The five-year-old Irish stallion suffered a fractured fetlock on the final bend and pulled up. The horse, ridden by Hugh Bowman and trained by Aidan O’Brien, was taken from the track by ambulance and later put down.

“It is with sadness that we confirm that Anthony Van Dyck had to be humanely euthanised after sustaining a fractured fetlock during the running of the Melbourne Cup at Flemington,” Racing Victoria’s Jamie Stier said.

“The horse received immediate veterinary care, however he was unable to be saved due to the nature of the injury sustained.

“Our sympathies are extended to the owners of Anthony Van Dyck, trainer Aidan O’Brien and all his staff who cared for the horse and are greatly saddened by their loss.”

The horse is the seventh to die after contesting the Melbourne Cup since 2013. Rostropovich suffered a fractured pelvis in the 2019 race and recovered.

The death is the second this year at Flemington, which averages two fatal racing accidents a year in flat racing. Peta, the animal rights activists, claim 116 horses have died on Australian racecourses.

The RSPCA said in a statement there were inherent animal welfare issues involved with horse racing and called for a review into industry practices.

“Whenever there is an adverse outcome for an animal, our expectation is that the industry will do a comprehensive review to identify ways to improve in an effort to avoid unnecessary injury or trauma in the future,” said RSPCA Victoria’s CEO, Dr Liz Walker.

“Racing presents numerous risks for horses and this very unfortunate incident illustrates the need for the industry to work toward better welfare for animals used in sport.”

“No animal deserves to die or be injured for gambling profits,” Meddick said. “Racing isn’t the sport of kings – it is a pastime of animal abuse. No amount of industry spin, glitz and glamour or celebrities can hide the truth.”

Rallies against animal cruelty are held annually around Melbourne Cup day. This year they included protesters wearing horse-head masks gathered outside the Victoria Racing Club holding signs reading “Nup to the Cup” and “You bet, they die”.

Concerns that Anthony Van Dyck, who weighed in at 58.5kg, could not win the race were dismissed the day before the race.

O’Brien also lost a horse in 2018 when the Cliffsofmoher was put down after suffering a fractured shoulder.

Horses are usually put down after sustaining injuries that would not normally pose a threat to a human life. There are a number of reasons for this, chiefly because they are unable to recover.

Horses have lighter bone mass and, when a break occurs, the bone shatters, making it difficult to repair. Even if the bone does mend, there is a risk the bone will be deformed and will be unable to bear weight, and the horse is likely to suffer severe pain.

A fatality report will now be prepared by the Racing Victoria Integrity Services team.

“The fatality report gives consideration to the circumstances of the incident and any potential learnings to assist in the prevention of similar injuries in the future,” Stier said.

“The report will include the findings of a post-mortem which will now be conducted by the University of Melbourne Veterinary Clinic and we expect it will be several weeks before we have a completed report for consideration.” - Guardian