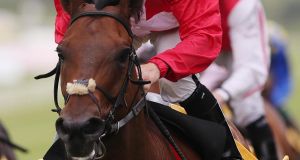 Just hours after the sport’s ultimate underdog, Gordon Lord Byron, collapsed and died during a routine piece of work the all-conquering Aidan O’Brien was reminded too of just how fickle racing’s fortunes can be.

O’Brien won the first four races at Leopardstown on Tuesday, at combined odds of 907-1, and looked poised to make it five-in-a-row with the 6-5 favourite for the Trial Stakes, Year Of The Tiger.

However the Galileo colt was pulled up injured in the straight by jockey Séamus Heffernan and subsequently had to be put down.

It gave stark cause to remember how even the best bred and valuable inmates of the world’s most powerful stable are no more immune to catastrophic injury as any other thoroughbred.

The romance of the Gordon Lord Byron story however was how it underlined how vast finances and the bluest of blue blood is no guarantee of being able to run from A to B faster than anyone else.

A horse that cost just €2,000 as a foal, and managed to fracture his pelvis leaving the stalls in his first ever race at Roscommon, emerged from unpromising circumstances to make his own unique impression on the sport.

He was successful at the top-flight Group One level on three occasions including when venturing to Australia in 2014 to win the George Ryder Stakes at the Rosehill track in Sydney.

Other international stops for the remarkable Tom Hogan-trained gelding included Dubai, Qatar, Hong Kong and even the Czech Republic. In total he earned almost €2 million in prizemoney.

It was over two years since the last of his 16 victories but ‘GLB’ was apparently still bursting with enthusiasm for a prospective 109th career start at the Curragh this weekend only for disaster to strike on Tuesday morning.

“He was a great horse and we had great times with him but all good things come to an end,” said Hogan.

“He was in super form. He did a great piece of work at the Curragh last Thursday and he was real happy in himself.

“It happened this morning. He wasn’t a horse that would have liked retirement – he died with his boots on.

“We were upset immediately after it happening. Looking at it now though, we’re just delighted to have been part of the story.”

For a sport still in the flush of resuming behind closed doors after an 11-week hiatus due to the coronavirus pandemic it was a sobering reminder of how fragile even the toughest half-tonne of thoroughbred can be.

Year Of The Tiger was having just his eighth start on Tuesday but his Futurity third to Kameko last year suggested a colt of plenty potential, as indicated also being a son of Galileo and the Group One winning speedster Tiggy Wiggy.

Having saddled a double at Naas the day before, O’Brien’s four-timer underlined Ballydoyle’s readiness for the delayed summer season.

Heffernan was on board Love Locket who landed the Group Three Fillies Trial and also Ennistymon in the opening maiden.

He had to settle for second in the following maiden though as the favourite Dawn Patrol came up half a length short of his stable companion Tiger Moth in a race in which O’Brien saddled the first four home.

A Ballydoyle trio also filled the first three in the Derrinstown Derby Trial but it was the outsider of the entire field, Cormorant at 12-1, that made all to win.

Jockey Pádraig Beggy memorably made all to win last year’s Irish Derby on Sovereign at 33-1, and a year previously sprang a 40-1 Epsom Derby shock on Wings Of Eagles.

He was on the big-race mark again here on a son of Kingman who cost over a million euro at a yearling and sported first-time blinkers.

“Any of Aidan’s, when you’re riding in a big race like that, it doesn’t matter the price, they have a chance,” Beggy said.

After her opening day hat-trick at Naas, Jessica Harrington failed to hit the mark but could bounce back with a vengeance at Wednesday’s Navan fixture.

One Voice is Shane Foley’s pick in the Listed Salsabil Stakes while the mile of the Heritage Stakes could suit the free-running Ancient Spirit more than the higher rated pair of Mount Everest and Buckhurst.

Harrington’s Albigna tops the betting for Saturday’s Tattersalls 1,000 Guineas at the Curragh where she could have to take on the combined strength of O’Brien & Sons.

Aidan O’Brien’s Peaceful is rated Albigna’s biggest threat by bookmakers. Donnacha O’Brien’s first Classic runner as a trainer, Fancy Blue, is as low as 5-1 and his brother Joseph has another leading contender in New York Girl.